THE OTHER WOMAN REVIEW

There are not a lot of good things that can be said for director Nick Cassavetes’ most recent comedy romp The Other Woman. Although, if the Powers That Be share my attitude, you can at least count on a Razzie nomination for Leslie Mann and a nomination for worst movie for this film.

The movie is about Mark King, played by Nikolaj Coster-Waldau. He is an entrepreneur and investor, although the exact details of his job are a little sketchy. He is married to Kate King, played by Leslie Mann. However, that hasn’t stopped him from dating sexy lawyer Carly Whitten, played by Cameron Diaz, and voluptuous debutante Amber, played by Kate Upton.

The story focuses on the ridiculous and completely contrived series of events that unfold once these women learn of each other. Instead of just washing their hands clean of the entire thing, they decide the best thing to do is get even. If hell hath no fury like a woman scorned, woe be to the man that was cheating on three of them at the same time.

It actually says a lot when you have two great comedy actresses like Mann and Diaz, two scene-stealingly beautiful women in Nicki Minaj and Upton, and even the ever charismatic Don Johnson and you still have an awkward, clunky mess of a film. There are multiple levels of comedy, awkward funny, poop humor, witty hilarity, straight man versus the world, etc. This movie fails on nearly every level of them. Instead of having an awkward, silly but still intelligent conversation, you have a series of cringe worthy, scenery eating acting. Instead of having witty retorts and clever insults, you have a series of mean spirited bashing at both genders. And, instead of having an intelligent or even misdirection in their poop humor, there is not one, but two different instances of jokes that are just that.

When you have a womanizing, money-grubbing leading male, the film will often go out of their way to make sure that he gets what he deserves. Obviously, for acts of betrayal, he does warrant retribution. However, there is a right and wrong way to go about it. For a strong example, see First Wives Club. Here, the character begins to resemble a Warner Brother’s cartoon, rambling to himself, spitting all over when he is talking and even crashing through a solid glass wall. Instead of just relying on the final revenge plot of the trio, the writer took the time to emasculate, humiliate and even grossly physically punish the man to the point where his cartoony antics are both cringe worthy and scream of a writer’s personal revenge fantasy.

What’s more, even though in a comedy film you are supposed to have people who are an exaggeration of real life, there was no one who would actually act the way that any human being would behave. What wife would befriend the woman who was sleeping with her husband? What wife would still sleep with her husband within a week of finding no less than three other mistresses? What brother would try to date the woman who is primarily responsible for ending his sister’s marriage? What secretary would openly admit to blowing off work because when you look that pretty, you don’t need to work? Every action seems a contrived piece that goes against basic human nature, and it is jarring from beginning to end. 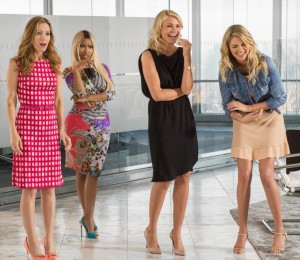 There is some redeeming value here; it isn’t completely devoid of comedy as there are brief moments of comedy; however, those moments don’t warrant watching an entire film. This movie isn’t just some mediocre, mass produced Hollywood cash-ins; that would almost be forgivable. This movie is just a failure on every level. It’s a romantic comedy that is neither romantic nor consistently funny. It is a female buddy comedy that looks more like they spend most of the movie constantly battling a nervous breakdown than actually working together toward a common goal. And nearly every single development and twist was foretold so obviously that the audience will find themselves begging for the reveal so that they can just go home. Every character is completely one-dimensional with no motivations for any of their actions. Having a couple of women working together to get back at the men who hurt them is a good idea for a film; however, this one is only an idea, and no amount of sex appeal is going to make it worth the price of admission.