THE PHANTOM OF THE OPERA HAUNTS THE PANTAGES THIS SUMMER

“The Phantom of the Opera” has long been my favorite Broadway plays. In fact, I’ve even seen it at The Pantages Theatre once before. But when I heard it was making a summer run back on Hollywood Boulevard, I knew I had to attend and I was not disappointed. 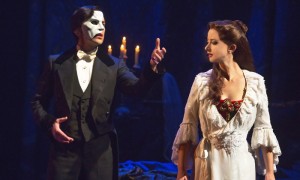 The first time I saw The Phantom of the Opera, I was a just a girl. It was my very first Broadway experience as a part of a French class field trip. My Dad came along as a chaperone, and I remember taking a big yellow school bus into Manhattan, sneaking Peanut M & M’s into the theater, and feeling a rush of excitement as the lights dimmed.

I was not fully prepared for the soaring beauty and incomprehensible tragedy this play would put before me. It brought me to tears even at a young age and solidified my own love story with the theater.  The musical score is something I have long cherished and as the lights dimmed on the Pantages, I knew I would find myself quietly mouthing every word to the stunning operatic voices that would unfold on stage.

This new production of Andrew Lloyd Webber’s The Phantom of the Opera starred Chris Mann (as The Phantom), Katie Travis (as Christina Daaé), and Strom Lineberger (as Raoul).  It was directed by Laurence Connor and choreographed by Scott Ambler, with Costume Design by Maria Bjornson and set design by Paul Brown. All three stars brought formidable voices to the roles, but Chris Mann truly captivated as The Phantom. There was also a standout supporting performance by Anne Kanengeiser as Madame Giry. 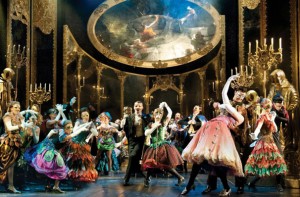 The play was billed as a ‘new production’ of Phantom but the story, music, and much of the details remained the same (which was fine by me!) The updated costumes were stunning particularly in the scenes that showcased the opera within the play at the Palais Garnier (real-life Paris Opera). The set featured a rotating center stage that turned to reveal the ladies dressing room, the manager’s back office (where quite a few of the Phantom’s playful notes were delivered), the smoke filled wooden stairwell that winded down to the Phantom’s ‘floating’ gondola, and his candle light lair complete with a piano and seductive bedroom. And the decor wouldn’t have been complete without the classic falling chandelier and toy chest featuring the monkey playing the cymbals.

The story that unfolds is of course that of the Phantom, a deformed musical prodigy, who now lives his life hidden away from all in the tunnels deep below the Paris Opera house. He becomes infatuated with an orphaned girl from the chorus, Christina Daaé, who believes the Phantom is the Angel of Music who has been sent to her by her deceased father. She soon becomes his her mentor, tutoring her in secret while covering his scars with a white mask. Before long, he turns Christine into the opera’s leading lady but when she reunites with a childhood friend, Raoul, whom she falls in love with, the Phantom is overcome by jealousy. He terrorizes the opera house, resorting to murder and kidnapping, to try to keep his beloved Christine for himself. In the end it is his tortured soul, not his mangled face which invites only fear and pity. However, in a final act of kindness, Christine shows the Phantom a moment of love before choosing her fate. 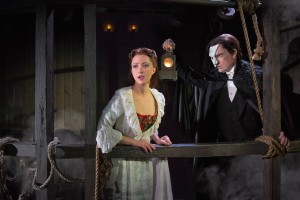 Watching the play as an adult, I was equally overwhelmed by the beauty of the music and the story, which now takes on more levels as seen through the eyes of someone who has loved, lost, and struggled with relationships. In the end, Phantom is a timeless play about unrequited love, obsession, and the blurred lines in between. I highly recommend seeing it at the Pantages before it ends its run August 2nd.