The first ever Rel/ Event series is taking place at The Attic to celebrate buzzworthy projects and individuals in the entertainment industry!

The Rel/ Event series features a unique opportunity for Hollywood’s top executives, talent managers, casting directors, and movers and shakers to share their insights with guests. The event will take place October 2nd and is Part 1 in a series that will continue every six months.  The panel lineup includes: 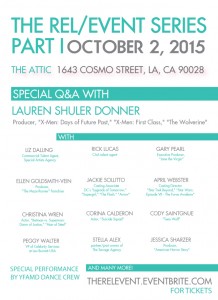 Get tickets at Eventbrite.