THE SHORELINE JAM BRINGS FUNK AND REGGEA TO LONG BEACH

The majestic Queen Mary stands tall as a sentinel guarding the beautiful Long Beach, crimson smokestacks welcoming hundreds of reggae fans to the historic port for Shoreline Jam.  Though sometimes hard to see through all the smoke, the ship set the background to a hot day of cool music. 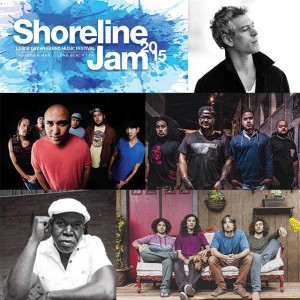 The mood of the venue was chill as the day began and the stragglers made their way in.  Like a Midwestern carnival, the perimeter was surrounded with fried foods, suds, and merch booths.  The lawn was littered with screaming fans playing games and taking in the vibe.

An early highlight was Tenelle, whose sultry voice commanded a crowd not sure if they were ready to commit fully to the acts on stage.  Her 45 minutes on stage were captivating as we all swayed along to her cooing.

The day rocked on with Sammy J, who was followed by Fortunate Youth.  Their Long Beach reggae sound brought back memories of Bradley Nowell in his old stomping ground.

The surprise hit of the day was most definitely Anuhea.  Hailing from Hawai’i, she brings an island vibe that meshes beautifully with her soulful vocals.  My first thought was that she channeled Mary J. Blige and interwove it with her native sounds, and this was confirmed when she performed a stunning cover from the Queen of hip-hop soul herself.

Then things took a nose dive and things came off the rails for a hot minute. 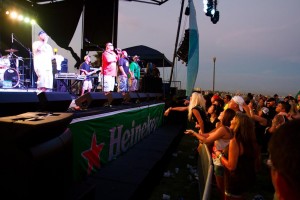 Schwayze – current rapper and former reality TV star, took to the stage and sucked the wind right out of the place.  With a hype man with no hype and a guitar player that might not have been plugged in, his set was like a third, unwelcomed coming of Fred Durst.

Fear not, reggae fans!  Unless you were doing the drip dance, the night was not completely lost.  Stick Figure, with their psychedelic sounds brought the crowd right back up, once the PA started working again that is.

Capping the night was another group of Hawaiian natives, (I’m sensing a theme here) the band with the least subtle name of all time, The Green.  In the shadow of the Queen Mary, cast by the moonlight, they saved the day.  The traditional Hawaiian vibes blended with old school reggae perfectly capped off the show as we danced the night away.