There are many celebrations and openings that keep people on their toes and full of excitement. But the “25th Anniversary of The Simpsons X Johnny Cupcakes Collection” launch in particular had hundreds of people waiting outside the door since the morning before!

The store opened their doors at exactly 1 p.m. on May 31st on Melrose and was greeted by fans in colorful Simpsons shirts! They had been waiting outside with their money and cameras in hand to attend this wonderful event hosted by the Johnny Cupcake staff and special guest Homer Simpson himself.

“Earlier this month, Twentieth Century Fox Consumer Products and Johnny Cupcakes, a faux bakery specializing in graphic t-shirts, announced this brand-new apparel and accessories line as part of the 25th anniversary celebration of The Simpsons this year.”

The event included a variety of contests with some pretty cool prizes such as toys, gift cards, and products from the collection. The event also featured some delicious goodies like a special cake made by Chef Duff Goldman from Charm City Cakes, mini-donut cupcakes and Duff Energy Drinks for the guests.

It was a sweet celebration of The Simpsons. 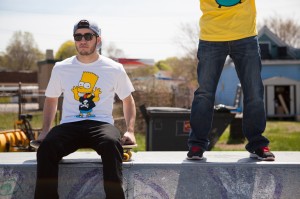 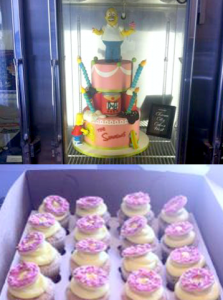