The spiritual realm is being awaken by holistic Mongolian Folk Metal act, Tengger Cavalry. This band is composed of many backgrounds of music, from Russian folk tones, Indonesian, metal, and of course Mongolian folk.

Nature Ganganbaigal (Mongolian Fiddle Morin Khuur, Flute)formed this force along with Alex Abayev (Bass), the vision of combining metal with folk music was just their most magnificent creation. This metal is diverse in style, sounds and traditions, it incorporates the ancient Mongolian singing tradition of Khoomei, or throat singing, not everyone can do it. 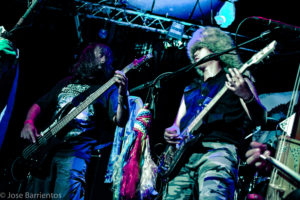 The Whisky A-Go-Go had the honor to present Tengger Cavalry on Monday night, despite the political debates going on, Tengger Cavalry rampaged the stage. Among the set list fans were able to ravage the pit during songs like “The Expedition”, this sensational folkish metal song awakes the spirits and allows the body to enter in a trance like no other metal songs out there. The sensational Asian metal band is taking America by the storm, and their Horse Head Fiddle (Morin Khuur Fiddle) master, Uljmuren, sits and plays notes that alleviate the soul from all penance. You might have seen the talented street fiddle players in Chinatown in Los Angeles or San Francisco, but he is straight out of China, the best Fiddler there is. The fans revolted as “Black Seed” was projected at them by this fantastic band, hearing Nature sing in the Mongolian traditional throat singing is mesmerizing, as you know a story is being told in the ancient traditional way, with a modern touch know as metal. 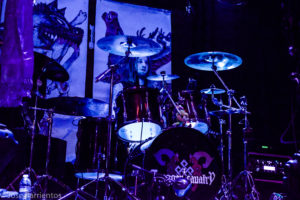 The nostalgia that ran through fans veins that night was felt, as the crowd headbanged to “War Horse”, a track that was released in their album, Mountain Side. The way this band makes the fans sway their bodies and lose themselves in the music, is by simply playing brutal Mongolian folk metal, and you can see the passion in the eyes of these skillful musicians. If you want a load of metal with a funky Mongolian twist make sure to check out this awesome holistic band, Tengger Cavalry.