Born in 1977 and bred from Ireland’s tumultuous ‘The Troubles’ era conflicts that lasted over thirty years, you’d think that the venerable punk band The Stiff Little Fingers, a group that is older than 36 countries, and has outlasted punk’s death and rebirth has seen everything.

But with No Going Back, the band’s first album in 10 years, they found themselves with their first #1 album in the band’s history.

Guitarist and lead vocalist Jake Burns has been there for all of this, and I was able to ask him a few questions about the new album, the new tour, playing Riot Fest and what else is going on with a band who, 38 years later, is as busy as ever.

PPLA: What did you think of Riot Fest? I know you’re from Chicago, was it good to play in a place where you’re local?

JB: We’ve played Riot Fest before, but this was the first time playing outdoors. It is an interesting concept, kind of like SXSW. I would go any year I can and play, it is the best organized, best audience, best run show, I mean one stage finishes and by magic the next stage lights up. Very easy for the fans to negotiate.

PPLA: No Going Back was fan-funded, why did you decide to go that route?

JB: It’s been 10 years since our last album and the industry has changed. It used to be before you play clubs, hope to get a record deal and have a career or not, that was the mindset. We had this deal with EMI, and they have been very understanding, they weren’t putting any pressure on us. But when we came back all the old people we knew had left, EMI still wanted to help out, but they weren’t very enthusiastic about their own role, they didn’t quite know what to do with us. So we all agreed that we’d be better off doing it on our own so to get the last 20% back was great.

But now it was all on us, before you could just go to other labels until someone hits it and the label can cover the costs but if you’re own audience doesn’t want the record you’re fucked. So we said let’s give it three months to raise the money, and we got it all in 12 hours. Which is great, but now the fans have bought the thing so we better make a bloody good record.’

PPLA: How was it making that album, what brought it about? 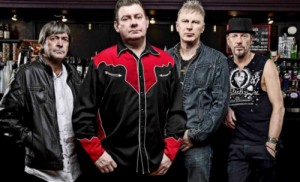 JB: I’ve always written songs about a sense of justice, the world around us. I’ve tried the love songs but it always comes out as lovesick poetry. I told my wife, “You want a love song? Get me pissed off.” I’ve always stayed with the social issues that effect our lives, I’ve lived a similar life to the audience.

PPLA: On your band’s site it says that the song “My Dark Places’” has inspired others to talk about their depression, how does that make you feel?

JB: Well, the song was written because I have battled depression for years. Depression is not like the flu, it is always there, it is always around the corner. You are always aware that you can slip and fall at any time, and the slightest stupidest thing can trigger it.

But now I can feel it coming on and deal with it, take a walk, just get myself out of that space. I wrote the song more as a catharsis for myself, but my wife said I should play it and after some badgering by her I recorded it and sent it to our tour manager. He listened to the song and flew straight to me and said that we have to play this song, more than any song I have ever written we need to play this one…and if it helps people that’s fantastic. I don’t want to be the poster boy for depression, but I love that it helps people.’

PPLA: What’s ahead for the band?

JB: Well I left here January 4th, got back Feb. 4th, left on the 14th and toured…got back in May, then started touring again in July, then we did a tour with The Offspring and Bad Religion. It’s great because it means we’re a working band. But the main thing is our audience, it’s more like we’re a sports team like the Cowboys or Manchester United, we are the team that they support.

To learn even more about this seminal band, buy tickets for upcoming shows or to purchase their latest album go to: www.slf.com.