“THE VISIT” NOT EVEN WORTH A LOOK

One of my favorite components of M. Night Shyamalan’s The Visit is the theme; don’t allow anger to impair an individual to mend a relationship.

That life lesson is poignant. The film opens with Mom (Kathryn Hahn) who has been contacted by her estranged parents of 15 years with a desire to reconnect by wanting to see their grandchildren, Becca (Olivia DeJonge) and Tyler (Ed Oxenbould), for the first time. Olivia, an aspiring teenage filmmaker pushes for this opportunity to document the entire trip for her mom as a way to obtain an elixir of forgiveness. 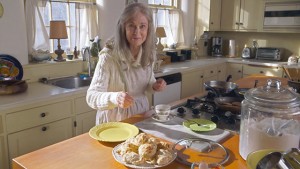 Deanna Dunagan is Nana in The Visit.

During the train ride to visit Nana (Deanna Dunagan) and Pop Pop (Peter McRobbie) the mood is light hearted and comical between the two siblings where we see Tyler’s rapping skills and sarcasm towards Becca’s reverence for the classical filmmaking style. Reaching the grandparent’s house, the second act of the film becomes a screwball comedy intermingled in the darkest hours of the night with Paranormal Activity antics of Nana displaying possession like characteristics.

The problem is when Becca and Tyler encounter Nana during these volatile states nothing climactic happens. The scenes fade out into a Shining type intro with red letters: Wednesday cast against an ominous sky. Those transitions lead to an expectation that the horror stakes will rise, which never really happened in this film. Bizarre behavior consistently reoccurs from Nana and Pop Pop. The poor execution and the brevity of tension at the end of these scenes make them lose dramatic power. The only emotion left when you’re no longer scared is laughter, which pervaded the audience during several scenes.

When we hit the twist of the film it becomes gripping. The mood drastically shifts for a moment from comical to thriller. Unfortunately the film relies too much on the handheld conventions and genre specifics created by Paranormal Activity making the final showdown’s cinematography and staging of the actors fall flat. Comedy dominated when there could have been room for more horror and dramatic scenes.