THE VOICE SEASON 9 WINNER IS JORDAN SMITH: FIND OUT WHAT ADVICE HE HAD FOR FUTURE CONTESTANTS 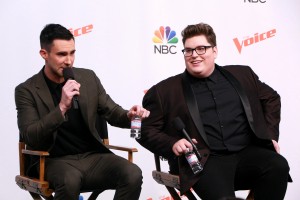 Press Pass LA was backstage just moments after the results were announced to greet Jordan. To the newly crowned champ, winning was not expected (though the rest of world totally knew he would). “It means a lot,” the singer said of his win during his post show press conference. “I didn’
t expect it. There were so many times I did not expect to be in this position. I’m honored and proud.” 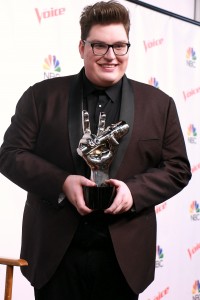 As for what’s next for the rising star, Jordan joked he wants to sleep for a week or so. After the holidays he’ll jump right into writing for his new record to be released by Republic Records. Jordan says he doesn’t feel like the work is over. “I’m at the foot of a mountain,” he mused. “Hard work is about to start.”

Adam recalled the other 8 winners of ‘The Voice’ saying Jordan indeed has his work cut out for him. “There have been shortcomings on the other side of the fence, the Maroon 5 singer said. He added though, he’s confident Jordan can break the mold and become a successful singer. Jordan did after all break ‘The Voice’ records in terms of iTunes sales. Leading up to the finale he had the top 3 spots beating out established artists Adele, Justin Bieber, and Selena Gomez.

Jordan also shared his advice for the next crew of singers to compete in season 10. “Live in these moments,” he said. “It’s gone by so quickly. I’d say not to get caught up in the process. Enjoy every little moment.”

Oh, and Adam’s final words were praise for Jordan and of course victory in once again beating co judge, and rival, Blake Shelton. “It feels so good,” he said adding he’ll be rubbing his triumph in the country singer’s face. I’m gonna think of new and exciting ways to terrorize him.”