With five artists left on each team of The Voice, there were bound to be some upsets when the eliminations started. Two acts were voted through by America on each team and the judges made a final save to round out the Season 8 Top 12.

Quite possibly the biggest upset came from team Blake. With Meghan Lindsey and Corey Kent White voted through and three insanely talented artists awaiting their fate, Shelton went with Hannah Kirby. None of us were more shocked than Sarah Potenza who seemed to have claimed her spot on that stage and in the Top 12. “She had, to me, if not the best, then one of the best voices in the competition,” roommate and teammate Meghan Lindsey said. 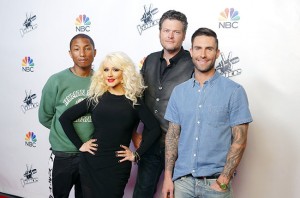 The decision for Team Christina seemed just as difficult for Aguilera who decided to save Rob Taylor Wednesday night. Taylor fought back tears and was noticeably overcome with emotion when he heard his name called, “to have a coach that believes so much in my gift and in my vision, I feel blessed and so thankful,” Rob gushed after the show. Kimberly Nichole and India Carney, who were voted through, round out Team Xtina.

Team Pharrell is the most eclectic group, and with Mia Z and Sawyer Fredericks voted through, I was on the edge of my seat to see who he saved but I didn’t think it would be Koryn Hawthorne. Crooner Lowell Oakley was saved twice this season and unfortunately the third time was not the charm. Fans chiming in online were most disappointed to see him go. I do, however, look forward to see what Koryn and Pharrell come up with, the best is definitely yet to come with her.

Stunner Deanna Johnson was voted through for Team Adam, no shock there, she’s been consistently delivering perfection all season. Fan favorite Joshua Davis also scored a vote through. “I’m shocked to be here, I’m so grateful but I really believed in my performance yesterday,” said Brian Johnson who was saved by Adam yet again.