SECOND WEEK OF LIVE SHOWS AT THE VOICE: TOP 10 SHRINKS TO TOP 8!

The playoffs on The Voice  are getting down to the wire and the show lost two more ladies Tuesday night; two of the self-proclaimed “three musketeers” that is. Tess Boyer and Bria Kelly got the boot leaving their girl Christina Grimmie to continue on to the Top 8.

Team Usher’s Bria Kelly received mix reviews from all of the coaches Monday night and was noticeably upset. Kelly said she originally wanted to perform “All of Me” by John Legend but doesn’t regret agreeing to “I’m With You” by Avril Levine. Now, she plans to focus on cutting a rock/R&B record, graduating high school, and possibly moving to Los Angeles. Bria Kelly recalled, “the best part of the show for me were the blind auditions, it’s where I got the most recognition for what I could do, and it’s where I was most myself.”

Tess Boyer landed in the bottom three for the second time but this time was not instantly saved, stating simply, “no regrets” upon her exit from The Voice. She has hopes of releasing new music as soon as she can, some of which she’s been co-writing with her brother Brooks. Boyer had nothing but gracious words for her coach, Shakira, who she says has given her some of the best advice, “no matter what obstacle is thrown my way, to stay true to myself, keep my head up and pour everything I have into my music.”

You take the good, you take the bad, put them together and then you have: The Voice Top 8!
Kat Perkins shocked audiences when she landed in the bottom 3 after a show stopping performance of “Landslide” by Fleetwood Mac. Coach Adam called Perkins a “blissfully perfect amazing singer;” America agreed and instantly saved her via Twitter.

Other team Adam artists Delvin Choice and Christina Grimmie, along with Perkins, were mentored by producer Graham Nash. Choice went with “Bright Lights” making sure that all fans will in fact “know his name, and be entertained.” Grimmie went against all odds and performed “Hold On” by Drake. Yes you read that correctly! It was stripped, acoustic, earned her a spot on iTunes top 10, and yes it was spot on. Former contender Bria Kelly says her money’s on Grimmie to win it all.

Kristen Merlin, now the only shot Shakira has to win this season, impressed with “Let Her Go” after spending the week being mentored by producer Busby. Producer Scott Hendricks mentored Sisaundra Lewis, Jake Worthington and Audra McLaughlin, aka Team Blake. Lewis delivered an “out of this atmosphere” performance of “Oh Sherrie” according to her coach. Jake and Audra stayed true to their country roots tackling songs by the greats, George Strait and Reba McEntire. 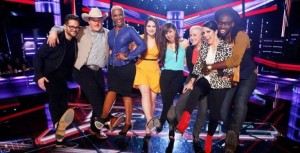 Usher told PPLA just how invested he is in his team and takes “every opportunity to teach them something…it all just happens in the moment.” Now, Josh Kaufman is the last man standing on team Usher. Last week he strayed from ballads and got the crowd moving with “This Is It” and the change in tempo was welcomed from fans and coaches alike; “right now I’m at a place where I’ve done three old songs, three ballads, three fast songs…so I feel like I can go anywhere.”

Teams Usher and Shakira head into the next round with only one artist each while Teams Blake Shelton and Adam Levine still have all of theirs. When asked to pick an artist, not on her team, to go all the way Shakira said certainly, “Audra.”

Check local listings and tune in tonight, Monday May 5th on NBC when the top 8 become 6!