THE WITCH A WELCOME RETURN TO ORIGINAL HORROR

I’m not sure how horror trends get started. Growing up in the eighties I remember slasher flicks like Friday the 13th, Halloween and A Nightmare on Elm St. being very popular. 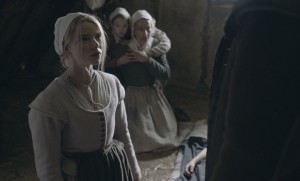 At some point the horror genre strayed away from what really scared us. Does seeing gallons and gallons of blood really scare you? Is seeing someone struggling in some sort of elaborate torture device really scary? Is the p.o.v. style used effectivley or is just dizzying? It’s pretty evident that studios do not care about such things. Instead they are more focused on what’s familiar to the audience rather than taking a risk and showing you something new. Just in the last few years, just about every popular horror film from the seventies and eighties was remade, Friday the 13th, A Nightmare on Elm St.,Poltergeist, Carrie, The Wicker Man, My Bloody Valentine, Sorority Row, The Fog, Prom Night and Black Christmas to name just a few. We’ve even seen studios go so far as to remake sequels of franchise films; Dawn of the Dead and Day of the Dead come to mind first. We the passive consumer, lost in a sea of saturation has no one to blame except ourselves because we somehow get duped into thinking things will be different this time around.

Original horror films are quite a rare thing these days. They’re out there; you just gotta look for them, although you may have to look abroad. The Swedish film Let the Right One In is a fine example. Of course the English-language-remake-because-Americans-cannot-be-bothered-to-read subtitles was released just two years after. A part of the French New Wave of horror comes Martyrs in 2008 and the American remake was just released last month. Australia found a successful export in The Babadook. Some very good serial killer thrillers came out of S.Korea such as The Chaser and I Saw the Devil. The rights to The Chaser were bought less than a year after its release though its status is in limbo right now. I’m sure someone will remake I Saw the Devil at some point.

This is not to say that American horror doesn’t have its moments from time to time. It’s just few and far in between. It’s just like finding a needle in a haystack year after year. Sometimes we might go a couple of years without a worthy entry. However in 2016, Halloween comes early this year with a film I had the privilege of attending a special screening of with the writer/director in person. This is a film that I would add to a very small minority of films. A film that that hopefully starts a new trend of quality horror films that is simply titled, The Witch.

The Witch is not your typical horror film. It benefits from a simple but an original story. This is not your tired clichéd something-happened-in-a-spooky-place-so-we-got-to-find-out-what-happened kind of story. The performances are akin to a Kenneth Branagh adaptation in old English. The cinematography is eye candy and is something to be envied. The pacing is that of a slow burner whose eeriness grows as the film progresses with steadily mounting suspense.

The Witch takes place back in the 1630s New England, shortly after the pilgrims arrived at Plymouth Rock. This is a whole sixty years before the infamous Salem Witch Trials in which twenty people were accused of witchcraft and executed. Now that is indisputable, that is history. This actually happened as a result of mass hysteria. To Puritans back in the day, the fear of witches and witchcraft was real. This film plays off of the actual fear that Puritans believed then. 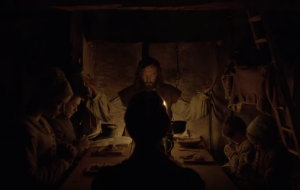 It all starts when the infant son of William and Katherine inexplicably goes missing under the care of their daughter Thomasin, Katherine gets grief stricken and sinks into a state of hysteria. Deep down inside, Katherine blames Thomasin for her brother’s disappearance but doesn’t really say anything at first. Little by little Katherine exhibits more distrust in her daughter blaming her for a goblet that she can’t seem to find that was passed down to her from her father. One night Thomasin overhears her mother suggesting that she is getting to be old enough that she should leave the house and work for someone else. It’s clear that Katherine wants Thomasin gone.

With their crops failing and other strange occurrences around the homestead, it is apparent that something unnatural is afoot. In the 1630s Puritan mentality, characteristics such as the ones experienced by this family can only be attributed to witchcraft. The reluctant father William, not wanting to give in to the rumors of witchcraft tries to keep the family together but the strange happenings are becoming more frequent evermore doubting his own logic. Meanwhile Thomasin is increasingly becoming as paranoid of her family as she is of witchcraft. Soon one family member after another starts turning on poor young Thomasin.
It is here where this film succeeds and elevates itself from the typical yarn. The depiction of the once loving family falling apart is truly haunting. What Thomasin is put through by her family echoes a real horror that unfortunately lives on today. The tension between the family members is just as frightening as the impending doom that lurks just outside in the nearby woods. At times this film is suffocating you with its suspense.

This film separates itself from the typical Eli Roth shtick in that it doesn’t have the benefit of using cheap plot devices like a cell phone not having signal or the car won’t start. The Witch relies on good old fashion storytelling and character development to effectively create an atmosphere of tension. These two main constituents are sadly missing from a lot of modern horror films these days. Not to mention the equally eerie score is a great accompaniment as well and very fitting. It should also be noted that all the music in the film was created from time appropriate instruments. The Witch also doesn’t rely on cheap jump scares; rather it throws a WTF moment at you every now and then.

The Witch isn’t really an all out fright fest as some reviews may have described it. It’s not that kind of a film. It’s more psychologically unsettling than it is supernaturally scary. That is not to say The Witch is not a horror film or not worth watching. On the contrary, this is much better than most horror films. However, without giving anything away, there is one scene in the film that I will say; I can see why Satanists endorse this film in which they really have publicly. Make no mistake, this film is still very much grounded in the horror genre and will still satisfy the hunger of the most avid horror fan.
I just fear that The Witch may be this year’s It Follows. This may be good news to some and bad news to others. The overall pacing and style might be enough to polarize the audience. Though admittedly, the thick old English accents are a bit difficult to understand at times. However this really does aid in the film’s authenticity. Though I personally didn’t care for It Follows too much I can respect why other people loved it. I really liked The Witch but I can see if others don’t. To each their own I guess.

What is for sure though, there’s no denying the quality of this film. I was particularly taken by the cinematography. I was surprised to hear director Robert Eggers and crew filmed it on digital and most of the film used natural light to simulate the look and feel of what it was like to live back then. The performances were good particularly Ralph Ineson who plays the father William and Anya Taylor-Joy who plays the lead Thomasin. Strong, believable performances are another thing that is in short supply in horror movies these days.

The Witch is a slow burner that likes to take its time to sink into your psyche that stays with you long after you leave the theater. It likes to toy with the idea that this is what may have planted the seed of hysteria here in America surrounding witchcraft. This is the kind of horror film that studios should green light more often. More films like The Witch and less films like The Last Witch Hunter. I hope The Witch and other films like it serves as a much needed wake-up call to horror films.