Press Pass LA was in attendance for this year’s World Dog Awards hosted by comedian George Lopez. The awards show aired Thursday, January 14th on the CW channel. The show included many categories such as Dog of the Year, Top Movie Dog, Best Dressed and Happiest Reunion. 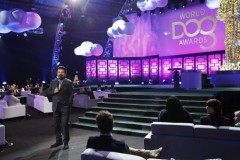 The World Dog Awards rolled out the green carpet for some of the most talented dogs and animals in the world. Accompanied by their owners were Doug the Pug, Mannie the

Frenchie, Bodhi, Amy the pig, Brandy the pug, Dally the horse rider and Norman the bike riding dog to name a few. Every dog had a special story. Like Saint, a dog who was going to be reunited on the show with his owner for the first time after serving the country overseas for nine months.

TV Host for the show “Save Our Shelter” Rocky Kanaka brought a dog Owen who was up for adoption. Social media star Brandy the pug is famous for surfing and snowboarding. Owner Jonny Dornam explained how Brandy got her start in sports. “At first, she was really scared of water and clingy,” says Dornam. But after placing her on a boogie board, Dornam says she later got onto surfboards and snowboards. 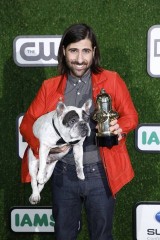 “I’m here to support all dogs- most dogs don’t get recognition because it’s always about the actors,” says Greene. “I think it’s really important to give them the recognition.”

For more behind the scenes and video check out the website: www.cwtv.com.