Two years ago, American audiences were completely awe-inspired by Gareth Evans’ martial arts cinema epic The Raid: Redemption. There was quite the following behind it, and justifiably so. The first movie was a big act to follow and, needless to say, Evans knocked it out of the park again.

The story picks up where the last one left off; Rama is being debriefed. In an attempt to ascertain just how deep the level of betrayal is within the police force, he is going deep undercover to get close to one of the two big gangs in the area. A few months turns into two years, and once he gets out, he becomes a lieutenant within one of the factions. What follows is an intricate yet easy to follow story as we are shown the dealings of the underworld, and what exactly it means to be honorable and respectable, regardless of where you are or what walk of life you’re in.

The strength of the first film was the brilliant fight choreography. All too often, the camera angles are so tight and jostling with edits that go by so fast it is impossible to truly appreciate what is going on or even who to root for at times. The second film is not only as well shot as the first, but perhaps even slightly superior. The fight scenes are done with a minimum of edits, and there was a lot of truly meaningful violence that never becomes  overly gory or unrealistic.

Of course, anyone who hasn’t seen the movie will, likely, judge it for just being a violent martial arts film and leave it at that. But there is so much more to it than that. In order to make it a strong sequel, there had to be a stronger story. There had to be character development. There had to be something that makes the audience feel like they weren’t just watching a remake of the first film. Sure, there are a lot of great fight scenes, it is the bread and butter that made the soon to be franchise the success that it is. But there is also subtlety, morally gray and otherwise complicated antagonists, and what might be the best car chase put to film since Bullitt.

The weakness of the film is the pacing. Since room was made for a lot more development, the opening scenes of the movie are rather slow. The first thirty minutes of the film are taking you to the prison and, if you haven’t seen the first film, will leave you in the dust confused. After that bit of opening, the scenes following are truly heart-pounding, if you’ll excuse the cliché. 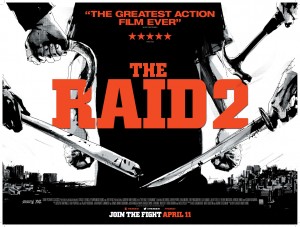 There isn’t anything to be said about The Raid 2: Berandal  that hasn’t already been said. It is an amazing film that is both intelligent and entertaining; with some of the best fight choreography of the last 20 years and one of the best car chases of the last 40 years. It is a great martial arts movie that actually takes the time to make you know and understand the characters and the consequences about what’s going on so that it’s more than just the mindless abuse and slaughter of hundreds of nameless henchmen. It is by far the best action movie of the year, and arguably one of the best movies that most will hear nothing about.