ADVANCED REVIEW: THEY CAME TOGETHER

Some genres are in desperate need of a change. For the past two or three decades or so the romantic comedy has been in a noticeable rut relying on a tried and true formula that, while reliable, allowed for little surprises. If all goes well They Came Together is going to change all that.

It is safe to say They Came Together is the Cabin in the Woods of romantic comedies. The movie simultaneously sticks to the established formula and tears it apart in such a manner that it will never be the same again. Told from unreliable narrators Joel (Paul Rudd) and Molly (Amy Poehler) the movie tells the insanely self-aware tale of how the two met and fell in love in New York.

A simple enough premise, and one that has been done literally hundreds of times before. The difference is this time around the audience is essentially spoon fed the formula in a way that it can’t be ignored. All the touchstones are there: a cute blonde that runs an independent candy story in the city, a failed first impression, a group of friends that comprise every cliche in the book…it’s all covered.

The truth is that in any other hands this movie could have been a disaster. But with Rudd and Poehler taking the lead in a movie by the same team that made Wet Hot American Summer it has the potential to be a true cult classic.

The movie is just as much about the big moments as the little ones and has a series of running gags that really show the audience just how absurd most rom-coms actually are to watch. Strange as it sounds this is a movie that might be even better the second time around.

While there’s no need for spoilers in this movie watching it unfold fresh the first time is well worth it. Though there are many funny films out there right now this is one of the few that I found myself actually laughing out loud numerous times, always a good sign.

There is no going back for rom-coms after this, their formula has been torn to shreds for all to see. Let’s hope that the next wave of films to hit theaters has learned a thing or two from this film and tries a different approach. 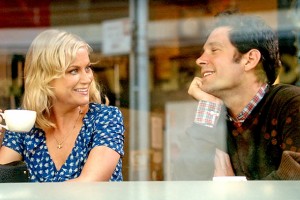 They Came Together will be in select theaters and iTunes June 27. Watch the trailer here.

View our interviews with the filmmakers and cast from the red carpet premiere at the Los Angeles Film Festival here.