August 26th my friends.  It is more than just Dog Day or Women’s Equality Day (which are still important and awesome observances which you should check out).  This year it’s also the day that Thousand Foot Krutch releases their ninth album OXYGEN:  INHALE. 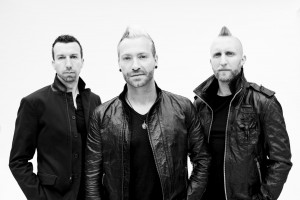 The two year wait is finally over, and fans can’t wait to see what the band has put together. Frontman Trevor McNevan had some time to spare between touring to have a chat with me about the album, from funding to inspiration, we have it all here.

PPLA:  “Born This Way”, the newest single from OXYGEN:  INHALE, seems to have a more southern/bluesy old school feel.  How did it come about?

TM:  It was really an organic process, writing riffs and a hook.  We had fun with it, but it wasn’t until the 11th hour when we got a friend to play slide guitar that if fell into place.  I’ve always loved both classic rock and rhyming, and it just made sense.  It has this explosive southern gospel flair and it was just a ton of fun to put together.  Hopefully, it isn’t too left field (for our normal fans) and it’s been exciting to see the response so far.

PPLA:  The message behind “Born This Way” seems to be about reveling in your own uniqueness.  Is this something that you’re personally connecting with, noticed in pop culture, or just something that you’ve always wanted to convey at some point in your music?

PPLA:  As a whole TFK is very connected with it’s fans.  Your route to fund Oxygen:  Inhale through Pledge Music has brought a whole new level to things.  (Funding goal was set at $1 because the album was happening either way). Has this connectedness had an influence on the album?

TM:  We went independent about four years ago, and it was a big step to do it.  It was really refreshing to do it all with the support of our fans.  It was a really refreshing, dizzy and amazing adventure.  The album was 100% inspired by the fans and supporters.  I came up with the idea for the album title about a year ago.  I was inspired by the concept of the element oxygen itself, how we as humans inhale and exhale it.  That developed into the heart behind it all being that we were all created to take full breaths and not half breaths.  It’s about living every day like it might be your last.

PPLA:  One last question, which actually comes from a fan.  David Diehl (Columbus, Ohio) wanted to know if we can look for any more TFK album remixes including the older stuff, or new music from FM STATIC?

TM:  We had such an awesome time doing the remix albums, and get a lot of requests from fans to do more.  It’s such a cool experience that I could see it happening again.  As far as the older stuff goes, we would love to do it, but the logistics and politics of working with our old records would have to be figured out.  However, we think and talk about doing more FM STATIC stuff a lot.  It will happen some day sooner or later, it’s just a matter of time.

If you can’t wait until the 26th to give the new album a listen, you’re in luck, iTunes is giving a FREE First Play of the album.