Everybody comes to Hollywood with a dream. Becoming the next big actor, director, producer, is par for the course as far as dreams go. The truth about Hollywood is now more than ever, these dreams have a real shot at coming true.

When a city full of creative minds meets the technology and new media of the current industry, it allows more people to become affordable filmmakers and anything is possible. One group taking their dreams into their own hands is the team behind the comedic short Time to Kill…hint, even the title is  a great play on words!

The film centers around Harris, a supposed hit-man, who seems to have well…time to kill…as he waits for his target Shekky to arrive home. The rest you will have to wait to see as we can’t reveal any plot twists as the film is currently submitting to the festival circuit. We will say, Harris ends up working like a dog! Wink Wink! 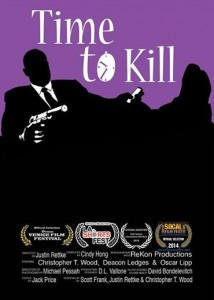