Tinashe was one of 2014′s breakout stars thanks to her sultry club anthem “2 On” which took over the airwaves this past summer. 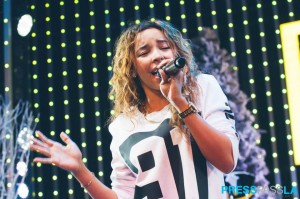 And if you thought she was a one hit wonder, the 21-year old L.A. native released her long-awaited debut album Aquarius to rave reviews. Fast forward to this past Saturday, Tinashe joined fellow hit makers Nico & Vinz (“Am I Wrong?”) to perform during the Toys for Teen charity drive, where all guests were encouraged to bring an unwrapped gift for a teen in need. And let’s just say, both artist brought down the house!

A little back story on the future superstar – In 2007, Tinashe joined Vitamin C’s short-lived girl group, The Stunners, under Columbia Records. They were dropped from the label in 2009. Since then, she’s released a series of successful mixtapes and has seen a rise to fame thanks to the power of the internet (and, specifically, Tumblr). While she’s played a few characters on TV and straight to DVD movies, her true gift is singing and performing.

Her lengthy journey to stardom has definitely provided a confidence and pure focus onstage that cannot be denied. With the crowd of screaming – er screeching – teens dying of anticipation while packed in the barricades of the Tower 5 stage, Tinashe made her low-key entrance as if it were another day at the office. 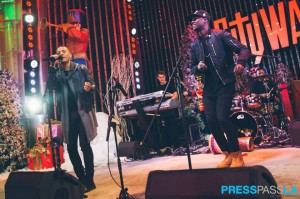 Lets face it, she’s got the moves, sex appeal and major voice needed to sustain relevance in today’s microwaveable music industry. Far from being crowd shy Tinashe had the outside theater in silent awe as she moved her hips and flipped her hair while singing Aquarius standouts ‘All Hands On Deck’, ‘How Many Times’ and her smash ‘2 On’.

If Tinashe continues to put this amount of effort into each and every performance – whether televised or not – we’re sure she will be a mainstay in the pop realm. The future looks extremely bright for this girl, as she’s already began her solo Aquarius tour which began December 5th. If you haven’t already, make sure you give her debut a listen and see her live when she comes to your city, you’ll definitely thank us! 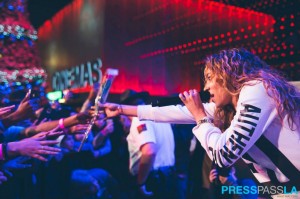 See the PHOTO GALLERY from this event.