TMNT 2 SHOULD HAVE STAYED IN THE SHADOWS

That’s a strange statement to make considering it is actually quite a bit better than the first movie in the rebooted series. The producers have at least sort of learned their lesson and hired Earth to Echo director Dave Green to give the film the style and tone of a cartoon. In that it passes with flying colors. It is everything else that misses the mark.

The story itself is basically paint-by-numbers with very little actually asked of the audience. TMNT 2 is one of those films where you can just turn your brain off and enjoy the bright colors for nearly two hours. The film is fine just so long as one of the CGI characters is on screen. The moment a human talks it becomes almost unbearable. Seriously, Tyler Perry cannot act, quit giving him roles.

For true fans this is a major shame because all the elements are in place for a fantastic film. All the fan favorites from the franchise are there: Baxter Stockman, Casey Jones, Rocksteady & Bebop and even Krang. It’s hard not to get a certain joy out of seeing them finally come to life on the big screen but they are so mishandled that buzz fades fast.

It’s as if the creators of the film didn’t think that anyone that considers themselves a fan of Teenage Mutant Ninja Turtles hadn’t already seen the other big blockbusters of the last decade so they just blatantly stole from them. You could create a drinking game out of how many times the movie steals from other, better films. The most obvious is both The Dark Knight and The Avengers. Not just minor homages either, big obvious rip-offs of key scenes. 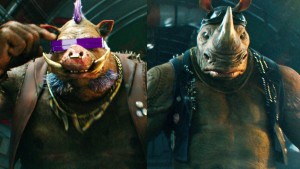 Which isn’t to say that, despite everything working against it, it’s a horrible film. In fact it is quite a bit more enjoyable than the first and that’s mostly due to the chemistry between the turtles and Rocksteady & Bebop. The crazy duo do their best to carry the film on pure lunacy and it mostly works. They know the movie is camp so they live it up. Watching the turtles finally interact with creatures they can relate to is a joy to watch. The sequel, if there is going to be one, should push the extremes of CGI and bring the turtles to Dimension X away from the horrible human actors and into the far reaches of the turtles mythology.

We’re in the middle portion of summer where the studios are starting to dump the films they know not many people will be watching. The next event movies don’t come until July so there’s not too much at stake for the studios right now. The audience will just have to endure a few more weeks of mediocre films before the good stuff comes back to cinemas.