Fans of the 2006 hit the Da Vinci Code, have been long-anticipated the upcoming film “Inferno” due out October 28th in which Tom Hanks, Irrfan Kahn, & Ron Howard will team up to bring the novel of the same name by Dan Brown to the big screen!

Hanks, Kahn, and Howard attended a red carpet at the ArtScience Museum at Marina Bay Sands on June 14 in Singapore to start promoting the release. 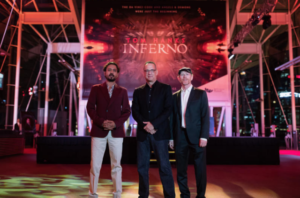 In the film, Hanks will reprise the role of Robert Langdon, a professor of symbology at Harvard University. Irrfan is playing Harry “The Provost” Sims, head of The Consortium, and Academy Award winner Ron Howard returns to direct the latest bestseller in Dan Brown’s (Da Vinci Code) billion-dollar Robert Langdon series.

Inferno finds the famous symbologist (Tom Hanks) on a trail of clues tied to the great Dante himself. When Langdon wakes up in an Italian hospital with amnesia, he teams up with Sienna Brooks (Felicity Jones), a doctor he hopes will help him recover his memories. Together, they race across Europe and against the clock to foil a deadly global plot.