You may have seen actor, comedian, musician and weed advocate Tommy Chong anywhere from the big screen on the hit film Cheech and Chong’s Up in Smoke, to Leo on That 70’s Show, to his time as a contestant on ABC’s popular show Dancing with the Stars.  Chong proves he is truly a Jack of all trades as he now adds talk show host to his long list of endeavors.

Press Pass LA chatted with this TV legend about his new talk show Almost Legal with Tommy Chong and much more. Guests of the talk show will include celebrities in the entertainment industry from fellow comedian George Lopez to Danny Trejo and Hannibal Burress. You can watch the show sponsored by WeedMaps on FOTV (Dish Network) and online at FilmOn.com starting at 8PM this Friday, October 23rd.

PPLA: Tell us, who is Tommy Chong? How would you describe yourself?

TC: I would like to call myself an artist. I am an artist. I have the soul of an artist. My talent is really talking to people. If you were to ask me in one word, I would say an artist.

PPLA: How did you get started with your talk show?

TC: I started with a desk. But I am not a desk guy. When I am behind a desk, I feel like I am meeting with a lawyer. We changed the set a little bit. I like to have a ‘smiley approach’. I sit in a comfortable chair, I have guests, I smile,  and it’s been going very well. A lot of people recognize me for who I am and what I am. I am having a wonderful time doing it.

PPLA: Did you ever see yourself as a talk show host?

TC: Not really, until I did it. When Cheech and I had our act together we would imitate talk show hosts all the time. I grew up watching Johnny Carson, Conan, Jimmy Fallon and all those guys. I have been on a few talk shows. I have been on Jay Leno. So I am really comfortable with the format, and I love that interaction with people. It’s a lot of fun. It keeps you young.

PPLA: With such a huge fan base and following on social media, how do your fans approach you on the street? 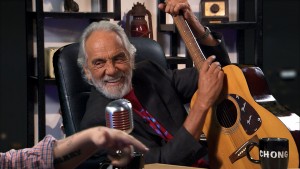 Chong isn’t afraid to let loose on his show.

TC: They don’t mind approaching me. I am very approachable. Especially, since I was on Dancing with the Stars. I got old ladies coming up to me, flirting with me and taking pictures. And I love it! I got snubbed early in my career. I saw an actor at a party, I won’t name him. But I saw an actor at a party, and I tried to talk to him but he gave me the worst cold shoulder ever. And I vowed if I was ever in that position, I would never never treat anyone badly. Because when people recognize you, it’s not an insult. It’s a compliment. And I will take a compliment any day.

PPLA: You are battling cancer and have become a strong advocate for legalized marijuana. What have you found helps you the most?

TC: Just lately, I have been smoking an Indica which helps me sleep. I have been fighting cancer now for about a year. No, actually I have been fighting cancer for a couple years.  About a year ago, I got diagnosed with rectal cancer. So there is a lot of pain involved. I started smoking  different strings to find the best pain relieving. Two days ago, I found this Indica that is the best weed. So far it just puts me to sleep almost immediately. When I am in a lot of pain I smoke that Indica and I am good to go.

PPLA: How can there be more medical awareness to cancer patients?

TC: I guess, what we are doing now is helping. It’s really tough. You have to show results. When I got cancer, I found out so many friends of mine have cancer but they were hiding it. I am kind of like a guinea pig for everything! Anything that happens to me I blab it out to the world immediately. Like when I found out I had prostate cancer. I had to do an interview the next day with Don Lemon on CNN and I just blurted it out.

I could have shut up and no one would have known. I had no reason to reveal it. I am a guy whose life is really an open book. When I went to jail, the world knew about it and I was very proud of it. In fact, one of my colleagues asked me f I was going to make a publicity stunt about my cancer. I said probably, because things happen to people and there’s no reason to be embarrassed or ashamed. It happens to a lot of people. If anything it’s best to let people know what works and what doesn’t work. That’s the way I feel about it.

Chong explained his whole life has been about sharing everything with people.  “You have to share the bad stuff too, and that’s what makes you human, and that’s the way I am.” Find out what else Tommy has to say when Almost Legal With Tommy Chong premieres this Friday.

And finally we ended the interview with one of the most popular questions Tommy Chong fans wanted to know on twitter:

PPLA: All your fans want to know, where’s Dave?