TONY FERRARI SELLS OUT THE TROUBADOUR

When I received a notice about Tony Ferrari’s show at the Troubadour, I didn’t know what to expect. I Googled his name and saw a 22-year old kid with a pompadour haircut and an acoustic guitar. Little did I know that this kid has the voice and talent to back-up his vintage look and appeal. 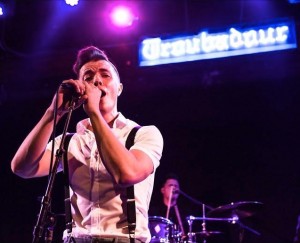 Ferrari, originally from Thousand Oaks, California, is a self-taught musician that’s inspired by legendary performers such as Marvin Gaye and Al Greene. This inspiration shines through his music that has a great vintage soul and sound to it. He’s been working on his album Gentleman for the past two years, so it was great to see him perform some of his popular hits, such as “Bite” (currently being featured on the Fox network).

He’s been on the fast track to stardom for a while, so it’s only natural that he was invited to play at the legendary Troubadour. In fact, he sold it out! The crowd was filled with friends, family and fans of all ages – clearly appealing to multiple generations. What really made the experience so unique was Tony’s amazing stage presence combined with the Troubadour’s cozy and intimate atmosphere. At certain points in the show, you felt like he was singing just for you (insert sigh here).

The crowd loved every song, as evident by their constant cheering. Some notable performances were “Gentleman,” an up-beat tune, and “By My Side,” a 1950’s-esque song that featured his smooth vocals. My personal favorite was “Ranger,” a sentimental tune about his car and love life that made you feel like laughing and crying at the same time. After his final song, Tony exited the stage, but the crowd wouldn’t stop cheering. Lucky for us, he came back for an encore and performed two more songs. Throughout his whole set, you could tell how happy he was to be performing for us, a small West Hollywood crowd. 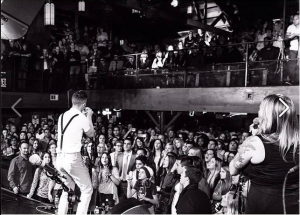 To listen to some of Tony’s music, visit: iamtonyferrari.com/pages/music. You can also listen to his album Gentleman on Spotify.