TOO LATE MOVIE AN AMBITIOUS FEAT

Dennis Hauk – the director of Too Late – set a very ambitions goal for himself; make a film that consists of five scenes, each the length of a reel of film, around twenty minutes.

Mission accomplished: in and of itself an impressive feat.  The film features five distinct scenes, each without a cut, wound together to ask the age-old noir question – whodunit? 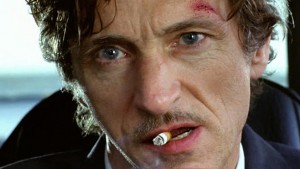 John Hawkes in Too Late.

John Hawkes stars as Mel, a PI with a penchant for self-destructive behavior.  We follow him on his somber journey to find and bring justice to the killer of a mysterious young woman, Dorothy.  As the puzzle pieces itself together we learn more about Mel and Dorothy’s history in his vain attempt to bring her some sort of peace in internment.  In the end, however, Mel’s past demons catch up to him, and often as in real life he never has the chance for redemption.

The question begged by Too Late is: does a director’s knowledge of cinematic history, ambitious risks with a camera, and a roller-coaster structure enhance a film, or are they simply tricks used to disguise the fact that the story telling is lacking? Too Late was filmed on 35mm, ambitious and costly in a world dominated by digital cinema, and constantly nods to the history of film (notable quips include Dorothy’s own joke about her lack of ruby red slippers).  It is exactly the type of film one would expect to see gracing the screen on the festival circuit, but will never translate to a mass audience.  As enjoyable as it might be for film-lovers out there, it will never find a home in a theatre stained with years of crushed popcorn and sticky with last nights soda.