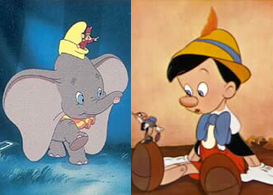 Being a Dad, I put my children’s entertainment under a microscope. I am picky anyway, which is why I am unsure of the recent films Hotel Transylvania and Frankenweenie, especially with the latter featuring canine necromancy. This has made me remember questionable decisions made by filmmakers from films in my childhood. Some are traumatic, some scary, and others just make you scratch your head. Todd’s Top Ten is back, here it is:

10. Transformers: The Movie (1986) – This was the first one I thought of, and the most personal to me. I saw this animated film version in theaters, age 10, by myself. Twenty minutes in Optimus Prime is dead along with some of your other favorite transformers. Then you have Orson Welles voicing a giant vagina with teeth that eats worlds. I had no idea what had happened by the end.

9. The Legend of Sleepy Hollow (1949) – The thing that messed me up about this one was the fact that the supposed hero, Ichabod Crane, when confronted by the horrifying and cackling Headless Horseman, he does not defeat him. He does not even achieve some kind of moral victory. He just disappears. Gone. That’s how it ends.

8. Bambi (1942) – The forest fire scene alone is scary, but then they have to go and kill Bambi’s mom. For me this was the beginning of an ambiguous relationship with Disney.

7. Labyrinth (1986) – The biggest trick that these questionable moments achieve is fooling you into that secure happy place. This one had an adorable teenage Jennifer Connelly, Jim Henson puppetry, a mystical fairy tale world, and…David Bowie as the singing in 80’s drag Goblin King. What? You guys remember that crystal ball he handled with such suspicious deftness? Even then I found it off-putting.

6. Dumbo (1941) – The pink elephants, of course. It’s amazing that this film is barely over an hour long but that pink elephant hallucination scene seems to last half of that. This happens because Dumbo is sad after visiting his mother and accidentally ingests water laced with ‘champagne.’ Personally I think there was something else in that cocktail. Absinthe makes the heart grow fonder.

5. Pinocchio (1940) – Apparently the road to becoming a real boy is paved with cigars, booze, wanton destruction, brawling and literally being transformed into a jackass to work in some overseas salt mine. This was the Pleasure Island sequence where “They don’t come back as boys” according to the Coachman quoting with one of the most creepily pedophiliac lines in film history.

4. The Wizard of Oz (1939) – As a child, the two scariest things in the world to me aside from my grandfather’s belt were midgets and clowns, in no particular order. This film manages to combine the two of them into a hellish singing and dancing combination with those gleefully demonic Munchkins. For the longest time afterwards I thought a guild was a midget clown cult. In my defense, the fear of clowns is called coulrophobia and the fear of midgets is achondroplasiaphobia. I have a medical condition.

3. Poltergeist (1982) – This movie fooled everyone. Well, it fooled my parents at least. I remember driving home from the video store with my dad and him telling me that Steven Spielberg did this film and he’s the same guy that did E. T. So that is what I was expecting. Not that murderous clown doll (yes, clowns again) and coffins sprouting out of the ground like gophers. You believe that film was only PG? Ah, the days before PG-13, where there was no difference between being 6 or 16 in terms of film maturity. Side note: Spielberg only produced this film, it was helmed by Tobe Hooper, who had gained notoriety from directing the original Texas Chainsaw Massacre. Ah, the days before IMDB.

1. Old Yeller (1957) – I know this is starting to look like an indictment on Disney, but come on, it’s not like some cartoon dog getting shot with a cartoon gun with cartoon tears streaming down the cartoon boy’s face as he pulls the cartoon trigger. The part that got me the most wasn’t the killing of the dog, it was the fact that the boy had to do it. Like it is some kind of redneck rite of passage. I’d rather just tip some cows.

Here are some honorable mentions that either did not have a specific moment or did not have the proper impact to quite make the list: Return to Oz (1985) – This was NOT how I remembered Oz, despite the evil Munchkin clan. The Secret of Nimh (1982) – Don Bluth’s directorial debut was scary, dealing with animal experimentation and its horrifying results of super-smart rats. I type this as my son watches Sesame Street and plays with a light-up alphabet. The time for him to have the bejesus scared out of him by cartoons, dead bunnies, and pop stars in drag will come soon.

Leave a comment and let us know what films from your childhood forced you to retain psychiatric services!