THE TOP BOXING MOVIES OF ALL TIME: IN HONOR OF MUHAMMAD ALI

Muhammad Ali, the three-time heavyweight champion who proclaimed himself “the Greatest” and then became the greatest boxer that ever lived has died at age 74. Ali suffered from Parkinson’s Disease for years but ultimately passed due to septic shock from natural causes. In his honor, we’ve highlighted the best boxing films of all time.

A public memorial service and funeral procession will be held Friday for Ali in his hometown of Louisville, Ky., where he will be buried. Former P 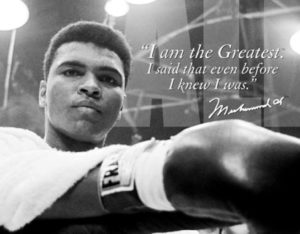 resident Bill Clinton is scheduled to eulogize Ali and Actor Billy Crystal and Broadcaster Bryant Gumbel are also are scheduled to speak.

Ali was surrounded by his family when he died on June 3rd and fans were told by family spokesperson Bob Gunnell  that Ali, who was Muslim, developed the plans for his funeral years ago. The service will include an  interfaith memorial service with clerics from several religions. Ali will then be buried in a private ceremony in Louisville.

In honor of one of the most iconic sports figures of our time, we’ve highlighted some of the best boxing films about the sport he loved. It’s only fitting that the list starts with…