THE TOP TEN MOMENTS OF THE 2015 OSCARS

The evening opened with at tribute to cinema from first-time Oscar host Neil Patrick Harris who proved why he should basically just host everything (despite the ratings)!! Yes, it’s true the Oscar telecast had the lowest ratings since 2009 and the Academy had hoped that NPH, whose successful turns as the host of the Tony’s and Emmy’s, would bring back the golden age of say Billy Crystal.  BUT, that’s like asking Obama to come into office and fix the problems of the last three presidents! Oh wait, that’s what we wanted? 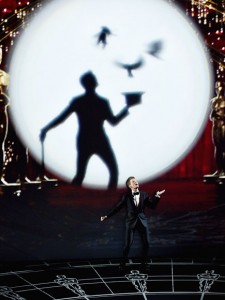 But lets be realists, perhaps we are just giving people too big of shoes to fill. The Oscars have long struggled with being seen as elitist and high-brow verse being seen as popular and in tune with the public audience. The thing is, sometimes well-made isn’t good, and good isn’t Oscar worthy. It’s a Catch 22 and Hollywood is full of them. In my mind, this year’s telecast did a great job of being a show and that is exactly what the Oscars are…a show that must capture your attention for three hours while delivering the voting results. As they say, the show must go on…

1) We opened with a musical number between NPH, Anna Kendrick (Into the Woods), and a comedically disgruntled Jack Black that was hilarious while also paying homage to the glamour of classic Hollywood. The stage was stunning and the magic of film was certainly captured. It was also fitting for a host who is a long time magician and former President of Hollywood’s Magic Castle!

2) NPH addressed the controversy over the lack of diversity in the Oscar nominations. His opening joke called the ceremony the celebration of “the best and the whitest — sorry, brightest.” He later joked with David Oyelowo, who many feel was snubbed for a Best Actor nod for Selma,  “Oh… now they like you!” But only after making him read insults with his British accent, because they just sound better that way. 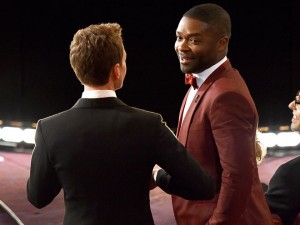 3) There were tears and the movies are all about tear-jerking moments.  John Legend and Common’s performance of “Glory” didn’t leave a dry eye in the house! The most visible being David Oyelowo, Oprah, and Chris Pine. Their speech when Glory picked up Best Song moments later was just as touching.

5) Speaking of speeches, if there were an award for Best Speech, it would have been the toughest category! J.K. Simmons (Best Supporting Actor for Whiplash) thanked his wife and kids and reminded the audience to call their parents and literally that was it- no agents, publicists, not even The Academy…and it was friggin BEAUTIFUL.   Best Actress Juliane Moore (Still Alice) acknowledged that there really is no such thing as ‘best’ in such a category but accepted her award gracefully in honor of all those suffering with Alzheimer’s.  Best Actor, Eddie Redmayne promised Stephen Hawking’s family he would take great care of his Oscar and polish him every day as he humbly shined a light on those suffering from ALS. And no, in case you were wondering, his speech did not end with an ice-bucket challenge! Finally, Best Director (Birdman) Alejandro González Iñárritu called for the respect and dignity of today’s immigrants reminding the audience that the United States is an immigrant nation, as he became the second Mexican Director to win an Oscar (he won 3 of them, enough said.)

6) Speaking of Birdman, cameras tracked NPH backstage until he arrived stage front in his tighty whities. Apparently those underwear get around as Michael Keaton rocked them in Times Square and Alejandro González Iñárritu joked (was he joking?) that he wore them under his tuxedo for good luck. Must have been a quick wardrobe change in the back! Worked out for NPH who donned some amazing suits throughout the show.

7) Lady Gaga. I don’t really need to elaborate here but what an amazing tribute for the 50th anniversary of The Sound of Music. There are haters out there, but Miss Gaga (soon to be Mrs.) brought the crowd to their feet. If there was any question, all you had to do was look at the face of Julie Andrews and know she had done Maria justice!

8) Snubs. Whether you agree or not, a good snub makes great next-day banter. In his introduction, NHP pointed out that American Sniper brought in more than all seven of the other films combined (more than $600 Million globally). “Everyone on this side of the theater is the seven other nominees, and American Sniper is Oprah. Because your rich!” Oprah’s shocked reaction alone was enough to talk about today (that and her Legos moment….thank you Lonely Island and Tegan and Sara #EverythingIsAwesome) But the truth is, despite being the public’s top grossing movie pick, American Sniper went home with only a Sound Editing statuette. (See snubs Clint Eastwood and Bradley Cooper).  There were of course other snubs and not even the deceased were safe here, as Joan Rivers was notably absent from the In Memoriam video. A definite misstep for the show, but I can’t help but smile thinking what she would have to say about it. Perhaps her having the last say was the point.

9) Politics…a.k.a Best Speech 2.0!  There was a rallying cry for equality. Patricia Arquette took her moment in the spotlight for Best Supporting Actress for Boyhood to shine a light on women’s rights and the need for equal pay for all. Queue Meryl Streep and Jennifer Lopez’s cheering like fans at an L.A. Lakers game!  Graham Moore, Best Adapted Screenplay (The Imitation Game) honored the life and struggle of Alan Turing and acknowledged his own suicide attempt as a young man, urging those who feel they do not fit in to “Stay weird, stay different.” Expect to see this on bumper stickers all over West Hollywood by end of day! 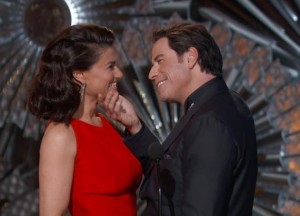 10) Is a tie between seat fillers and John Travolta. First off, you know you wish you were a seat filler. This year NPH put a few of them- traditionally used to fill seats and blend in when a celebrity needs a snack or potty break- on blast and it was hilarious. He even asked Steve Carell who he hoped to meet! (Answer: Ed Norton)  But presenters Idina Menzel and John Travolta rehashing last year’s Oscar pronunciation blunder was equally amusing!

Did we ever find out NPH’s predictions in the locked suitcase or is Octavia Spencer still sitting there waiting for a seat filler?

All photos courtesy of The Academy.