Happy Memorial Day! Press Pass LA thanks all those who have and continue to serve, and thanks to those who support families, spouses and friends of those who serve. As PPLA’s resident Navy veteran, here is a special Memorial Day Weekend edition of Todd’s Top Ten films featuring the best U.S. Navy films of all time.

First, there are a few regulations we must follow:

10. Chasers (1994) and Under Siege (1992) – Neither film is very good, even if the latter is probably Steven Segal’s best. What these films do have in common had a great effect on me especially at the age of 18, and that is Erika Eleniak, former playboy playmate. Not only did she don the uniform in both films, she took it off in both films. Sorry for the lasciviousness of the pick, but ship life for me was easier knowing there were women like her supporting us squids.

9. The Caine Mutiny (1954) – Starring Humphrey Bogart, in one of his more forgotten-but-great roles (his third Oscar nomination) as Captain Queeg, a career man whose no-nonsense disciplinarian ways clash with the younger officers. The younger officers undermine Queeg’s authority at every turn until there is a mutiny and subsequent trial a la Mutiny on the Bounty. Bogart’s performance stands out because through about 119 minutes of the 124 minutes of this film you are meant to hate him, but at the very end you feel sorry for him thanks to a wonderful speech by Lt. Greenwald (Jose Ferrer). Re-watching the film with this speech in mind Bogart’s idiosyncratic ways make him a more pitiful character.

8. Navy Seals (1990) – Again, not a very good film, but necessary. We needed a good ra-ra action film recruitment tool for the Seals and what a better example for the requisite discipline than Charlie Sheen? Also starring Michael Biehn (Terminator) in the second of his three times playing a Navy Seal Team Commander. Can you name the other two?

7. Men of Honor (2000) – The true story of Carl Brashear, the first black diver, also the true story of the first black amputee diver (spoiler: it’s the same guy). This guy, played by Cuba Gooding, went through a lot and his hard-ass instructor (Robert De Niro), did not make it any easier. Really nice feel-good story and well-acted by both Gooding and De Niro.

6. Down Periscope (1996) and Hot Shots! (1991) – Another tie! Also another reason to allow ties. Who could choose between these two films when you can only have one slapstick Navy comedy? Exhibit A: Kelsey Grammer leads a ragtag group of submariners into comic situations with hysterical resolutions. Exhibit B: Charlie Sheen (Winning!) leads a ragtag group of pilots into comic situations with hysterical results.

5. The Hunt for Red October (1990) – Reagan once commented that this book was causing him to lose sleep, leading to millions to do the same thing. Now I guess that’s Oprah’s job. In any case this is my humble submission for Navy submarine dramas. This won out over Crimson Tide, Run Silent Run Deep, and U-571 despite Russian Captain Sean Connery’s Scottish accent.

4. An Officer and a Gentleman (1982) – Wanna hear something a little sickening? This film has won more Oscars than any other on this list. Kudos to Lou Gossett, Jr. who won one of those Oscars playing a hardass Marine drill sergeant three years before R. Lee Ermey pioneered the role in Full Metal Jacket. Navy buddies of mine would always quote as whilst we were being ‘escorted’ out of bars the “We don’t got nowhere else to go!” lamentation made famous by Richard Gere.

3. Top Gun (1986) – I feel the need, the need, for blantant homoerotisicm! I have been a ‘Top Gun’ apologist ever since gay culture has become more mainstream which has since put this film in a big, bright, pink, spotlight. Yes, there is the volleyball scene. Yes there is the bet to win carnal knowledge of a lady (quite a stipulation) this time. But this film also features the very vessel I was stationed on, albeit a few years after the film. This film is like that guy in highschool you thought was cool, got along with, but always thought that there was something else going on with him that you could not quite figure. Something that would take time and societal progression to figure out. Then you go to your 10 year reunion and you meet his partner, Iceman.

2. Mister Roberts (1955) – Let’s call a muster for this film. Stars: James Cagney (3 Oscar noms, one win), Henry Fonda (3 noms, 2 wins including honorary), Jack Lemmon (8 noms, 2 wins, one for this film), and William Powell (3 noms). That’s four legends of acting in a WWII comedy about boredom at sea, something I can certainly appreciate. John Ford initially directed this film based on the Broadway play that also starred Henry Fonda until Ford punched Fonda due to creative differences and (mostly) Ford’s drinking problem which eventually saw him replaced in the film as director. Ford and Fonda, who had made eight films together to this point, worked together only once more. This film was also one of the first roles for Betsey Palmer who 25 years later would portray one of the most famous mass murderers in film history as Mrs. Voorhees in Friday the 13th.

1. The Last Detail (1973) – Critics say that Apocalypse Now is the most accurate depiction of the Vietnam war, in all its chaos, depravity, and murder. If so, then The Last Detail is the most accurate depiction of Naval shore life in all its boredom, depravity, and drunkenness. Jack Nicholson stars as a cynical Navy lifer tasked along with fellow lifer Otis Young to escort young, dumb, and full of…stuff Randy Quaid (in an Oscar nominated performance!) to a hardcore military prison for eight years for stealing a mere forty bucks. Nicholson decides that along the way they are going to show the affable loser a good time. Navy style. 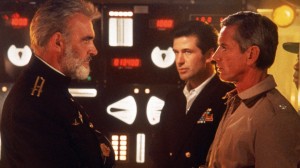 Great dialogue, best Navy/Marine fight scene in history, and a time when Randy Quaid did not play varying degrees of Cousin Eddie. I love every film on this list in its own way, but this is the one that makes me sit, drink a few beers and lament the old days.

Honorable Mentions: On the Town (1949) and Anchors Aweigh (1945) – Two musicals, each starring Gene Kelly and Frank Sinatra about sailors on liberty. On the Town takes place in New York, while Anchors Aweigh is set in Los Angeles. Both are excellent with Gene Kelly’s spectacular energy and choreography mixed with the seething cool of Sinatra.

On the Town is perhaps the better film with better musical numbers, but Anchors Aweigh has the iconic scene where Gene Kelly dances with an animated Jerry Mouse, a scene since parodied by Family Guy. Again, thanks to all who keep us safe, and to those who care for the ones who keep us safe. A special HOO-YAH! to my fellow Navy brothers and sisters. Please let us know what you think of the list and what films I should have included or not.

Have a great Memorial Weekend!