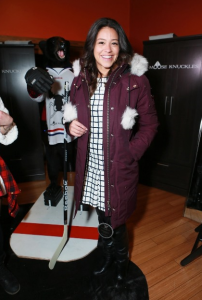 Now on to the gifts! Numerous celebs flocked Main Street carrying large, orange Superdry gift bags packed with high quality ski jackets, leggings, backpacks, and goggles all from this year’s TR Suites. Superdry is iconic in the London fashion scene and was a big hit at this year’s Sundance Film Festival. No wonder it is sold in over 46 countries worldwide.

Yet another European influence at the TR Suite this year was Parisian brand, Vaurnet, who has been a major influence in the optical world for nearly 40 years. While in the suite, recent Golden Globe winner, Gina Rodriguez and her beau Henry Esteve enjoyed some R & R on the ski lift display in the suite sporting their new Vaurnet shades.

CAT Footwear was yet another brand at TR Suites that offered industry guests plenty of shoe options perfect for the urban-dwelling man or woman. My personal favorite was the Corrine boot, which was also a favorite on Ten Thousand Saints’ Hailee Steinfeld.

No outfit is complete with out the most important assesory of all: a phone cover. Luckily, Otterbox was on hand introducing its new charging cases and protective cell screen covers “Clearly Protected” promoting privacy. A popular one amongst the celebs!

Rumerfix.com was also a sponsor of the suite providing the latest in pop culture news, which is, and continues to be a reliable source for talent, publisicts, and stars themselves to keep the record straight. Now on to more fashion!

Yet another accessory turning heads was the Alex and Ani Jewelry that gifted industry guests their beautiful charmed bangles that offer customized settings for the perfect fit!

The trendsetting clutches and handbags at TR Suites that industry professionals awed over were from Botiker New York. These bags have been seen on everyone from Angelina Jolie to Demi Lovato. A personal favorite was the “Trigger” backpack in metallic, perfect for weekend resort travel at Sundance!

Not only did TR Suites have amazing brands they also treated industry guests to amazing food and beverage. Westrock Coffee was on hand with their East African coffee, keeping stars energized between movie screenings. While Jackson’s Honest Potato Chips helped provide guests the most natural and healthy potato chip out there! Australian Yellowtail Wine, also know as the “go to wine,” featured a trio of wines including Pinot Grigio, Sangria and their big bold Red. These wine selections paired well with Mellow Mushroom’s pizza, an assortment of gourmet soups, and other delectables. 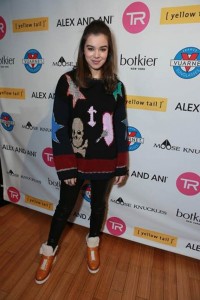 The heart of the event was the charity project known as “Moose on The Loose,” which featured a mechanic beaver riding experience to raise money for a chosen charity. Support this charity by posting photos from the TR Suites on your Facebook or Instagram with the hashtag #GetLoseWithTheMouse.” A $10,000 donation will be made through the Canadian sportswear company, Mouse Knuckles, the premiere in outerwear.

Well there you have it! TR Suites did it again, by putting on the hottest suite on Main Street at this year’s Sundance Film Festival. Look out for TR Suites at their next stop at the Kia Luxury Lounge and Rolling Stone Big Game Weekend Party featuring Steven Tyler and Charlie XCX at this year’s Superbowl!