Hugh Jackman unleashes his claws as Wolverine one last time in the character’s third and final solo film, Logan. The film has undergone a lot of changes since its inception but if the trailer is any indication it is going to be a fan favorite without even trying.

Let’s break down what seems to be going on in the trailer. We open on a shot of Wolverine’s bloody hand, shaking either from just doing a horrible act or simply from old age. This movie is loosely based on the best-selling graphic novel Old Man Logan which has Wolverine navigating a post-apocalyptic landscape. There seems to be many elements of that here. 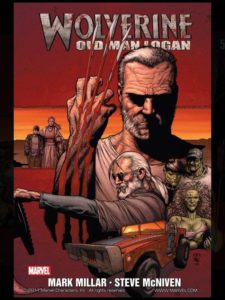 The biggest change from the source material seems to be the fact that there are no more mutants left except for Charles Xavier and Logan. In the comic book it was almost the exact opposite. Super villains had taken over the United States and rogue mutants of all kinds were running rampant. On one occasion Wolverine has to fight the Hulk’s inbred children who actually swallow him whole at one point. Considering Hulk is tied up with Marvel Studios it is a safe bet they can’t go that route. Instead this feels a lot like the landscape of Children of Men with Hugh Jackman in the Clive Owen role.

As the trailer continues we see an aging Charles Xavier in what looks like the remnants of Cerebro. It is possible that over time his power simply became too much and he is in a catatonic state because of it. That is until he gets a glimpse of a girl, who is highly implied to be the last mutant. Thus begins the road trip across the desert landscape. In the comics it was a blind Hawkeye that came with but Charles Xavier makes far more sense in this context.

Who is the girl? There’s every chance that she is X-23, or Laura Kinney, and quite possibly the last mutant alive. In the comics Kinney is a female clone of Wolverine. She has most of his same powers including claws in not just her hands but in her feet as well. She would eventually go on to “succeed” her quasi-father Logan by adopting his name and suit. With Jackman leaving the role Fox needs someone to take his place and it seems the comics have provided the perfect opportunity for that to happen. It messes with the continuity a bit but that’s almost a given for the X-Men franchise.

Patrick Stewart and Hugh Jackman hit the road to save the last mutant in Logan. Image via 20th Century Fox.

It’s at that point that we get our first look at the villains. This is where things get a little murky. It seems the villains in this film are known as The Reavers led by Boyd Holbrook’s Donald Pierce. The Reavers look to be mutant-hating cyborgs and could be a Terminator-type adaptation of the sentinels from Days of Future Past. There were also hints that Mr. Sinister would make an appearance as The Big Bad but they may have simply been a red herring.

The use of Johnny Cash’s “Hurt” over the trailer is riveting and really grounds everything. This movie is going to be worlds away from X-Men Origins: Wolverine, the first part of this trilogy. Director James Mangold knows his work and treats what could have been a bonkers tale with respect.