Marvel’s Captain Marvel has slid into our lives today with an epic new featurette we’ve been watching on repeat!

Captain Marvel is set to debut this March 8th in theaters nationwide. Set in the 1990s, Marvel Studios’ Captain Marvel is an all-new adventure from a previously unseen period in the history of the Marvel Cinematic Universe that follows the journey of Carol Danvers (Brie Larsen) as she becomes one of the universe’s most powerful heroes. While a galactic war between two alien races reaches Earth, Danvers finds herself and a small cadre of allies at the center of the maelstrom. 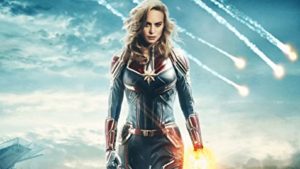 The film stars: Brie Larson, Samuel L. Jackson, Ben Mendelsohn, Djimon Hounsou, Lee Pace, Lashana Lynch, Gemma Chan, Rune Temte, Algenis Perez Soto, Mckenna Grace, with Annette Bening, Clark Gregg, and Jude Law. With such a star studded cast we’re on the edge of our seats for the film’s March debut! Then we will all have to keep our eyes peeled for her exciting addition to the Avengers family in final upcoming part two of Avengers Infinity War debuting later this year!