Brie Larson is bringing the ultra powerful Captain Marvel to the big screen in 2019. Our hearts are already aflutter for this action packed, female-led juggernaut to drop!

If you caught Brie on Good Morning America, then you’ve already seen the trailer. If not, we highly suggest you play this on repeat…all day.  The trailer’s tag line is: Higher. Further. Faster. More. Can we all give a standing ovation to Marvel for a trailer drop that screams female empowerment, with a no nonsense female lead. Brie looks fit, and amazing! The special effects are dynamic. This film is being Directed by, Anna Boden and Ryan Fleck. Anna also had a hand in writing the screenplay. Can it be 2019 already?? We can’t wait to see Captain Marvel dominate the big screen! 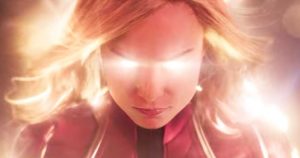 Don’t know who Captain Marvel is? Check out some quick facts below:

Captain Marvel’s incredible power set may be Marvel’s closest answer to DC’s Superman. Danvers was already formidable as a human. She served in the Air Force, the CIA, and NASA even before her rebirth as a superhero, setting herself apart as an accomplished pilot, soldier, and secret agent.

While she was security director for NASA, she was assigned to investigate Kree warrior Mar-Vell. While she was unraveling the mystery surrounding the Kree warrior, she was embroiled in a Kree conflict. After an accident with high-tech Kree energy equipment fused Mar-Vell’s genetic structure with hers, she was given all of Mar-Vell’s extraordinary powers, turning her into Captain Marvel.

After watching the trailer we believe Marvel Studios may be playing with one of the comic’s storylines which target Captain Marvel’s weakness: A Split Personality.  Thats right, after inheriting so much power Carol Danvers aka Captain Marvel has a very difficult time processing her old life and new powers into the same person. We wonder if her memory loss has to do with this storyline? Hmm.

Carol Danvers initially possessed superhuman strength, endurance, stamina, flight, physical durability, a limited precognitive “sixth sense”, and a perfectly amalgamated human/Kree physiology that rendered her resistant to most toxins and poisons. She also posses Space Travel ( yeah she can breathe in outerspace), Heat Power (Her powers mirror the power 0f a star), Control over Electromagnetic Energy, Healing Powers, Super Speed, Kinetic Energy Absorption, Gravity Manipulation, Teleportation, Photon Blasts (which we see in the trailer!!), Alter Reality (This is part of her cosmic energy connection), Cosmic Awareness, Oh and without the alien DNA jam up, she’s also ex CIA, an ex fighter Pilot, and just plain smart. So….Captain Marvel has got the juice. We can’t wait to see what Marvel brings to the big screen! Let us know your thoughts!