Mortal Engines follows Tom, a twenty-something Londoner who has only ever lived inside his travelling hometown, and his feet have never touched grass, mud or land. His first taste of the outside comes quite abruptly: Tom gets in the way of the masked Hester’s attempt to kill Thaddeus Valentine, a powerful man she blames for her mother’s murder, and both Hester and Tom end up thrown out of the moving “traction” city, to fend for their own. 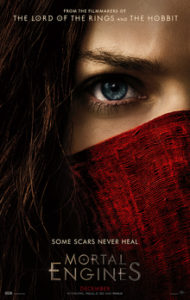 A high fantasy adventure thriller set to debut this December, which will be the perfect holiday adventure.