As of late, Judd Apatow has been the man behind many recent hilarious and successful sex-comedies. However, unlike his normal Seth Rogen and company filled films, his latest project Trainwreck stars rising comedian Amy Schumer.

It’s rare when you can watch a film and laugh the entire way through. However, Trainwreck manages to do just that. As writer and star of the film, newcomer Schumer brings a witty and fresh approach to comedy. 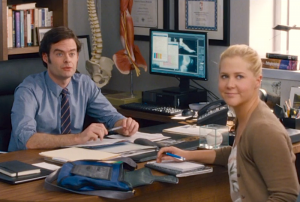 In the film, Amy (Schumer) is a commitment-phobic woman with a possible drinking problem—a literal trainwreck. However, she meets Aaron (Hader)—a sports doctor whom she interviews—who changes her initial views on monogamy. Consequently, Amy struggles to adjust to the idea of monogamy being possible.

For her film debut, Schumer managed to tackle the other side of the tracks. Plus, you can’t go wrong with Bill Hader and LeBron James as members of the supporting cast!

So, if you haven’t hopped on board to view the Amy Schumer experience, I suggest you do just that! Check out Trainwreck in theaters Friday, July 17.