Director Wally Pfister’s Transcendence is a film that poses a significant amount of ideological and philosophical questions: What is the meaning of life? How do you define consciousness, or life? Do the benefits of technology outweigh its inherent evils? It would have been really great, however, if the film took the time to answer them as well. 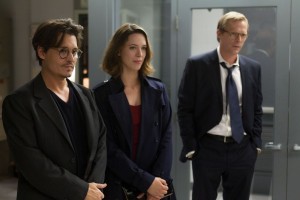 The story centers on Dr. Will Caster, played by Johnny Depp, and his wife Evelyn, played by Rebecca Hall. They, as well as an extensive team of scientists, are working on constructing a fully sentient artificial intelligence. As they are nearing their final breakthrough, a team of radicals, led by Bree (Kate Mara), wipe out the team and all of their work as well as nearly all of the scientists, including Caster. Desperate to save her husband, Evelyn hooks Caster up to the remains of the device. His consciousness salvaged, he begins copying himself and expanding his consciousness and technology at a nearly exponential rate, with his desire to expand threatening life for everyone else as we know it.

At the outset of the film, the scientists ask the existing, rough AI if she can prove that she is self-aware, to which she responds, can you? Although there are significant philosophical ramifications in this question, the movie just rather glances over it without really answering it, forcing the film to rely on making the audience answer it for themselves. It’s not necessarily a bad thing, but there were so many opportunities to at least offer a myriad of viewpoints. Such as, is Caster still the same man when he’s plugged in? Is the original AI as legitimate of a consciousness? How would one prove themselves as autonomous individuals? There are far too many questions that go unanswered.

The framing device was a hindrance to the story telling as well. By opening the film several years after the final resolution, the suspense from the film’s climax is completely removed. There are films that handle the idea of an AI out of control far better with a climax that will actually hold the audience on the edge, such as 2001: A Space Odyssey and Colossus: The Forbin Project. Here, it’s not a matter of which side will prevail in the conflict, but how will the events unfold. Even though the how and the why of a story are very important, the mystery and the suspense of the what should hold equal weight.

The special effects in the movie are very well done. Considering that Dr. Caster is a computer, having so much CGI actually would make sense. The scenes in the laboratory that is created toward the middle of the film especially look fantastic, yet still incredibly realistic. The acting tends to take a bit of a back seat. When you have the star power of Morgan Freeman, Johnny Depp, Rebecca Hall and Jude Law you’re not going to find anything specific to complain about. They are all very accomplished and do their craft well in this film. However, the range of the actors isn’t really tested, and we aren’t shown anything really new from any of them. 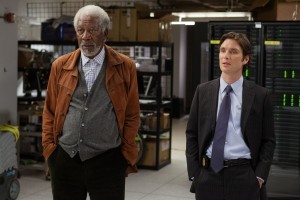 The film tends to focus more on the special effects, leaving the actors to merely read the lines given to them in a manner we would expect from them. Transcendence is guilty of being a mediocre film. The acting isn’t particularly ground breaking, and while the special effects are impressive they are still not something that hasn’t been seen before. More importantly, the story doesn’t take any risks or chances with its potentially provocative material. It poses a lot of questions about our understanding of life, the risks of too much technology and even the potential existence of God, but instead of actually making a statement about them, it just sort of glosses over them to see the completely impractical, but still entertaining, story. This is by no means a bad movie, but is not necessary to go and see in a theater.