The 2014 Tribeca Film Festival brought out some of the industry’s best and brightest. While not all of their films were mind-blowing their ability to pave new ground is admirable. Below is a list of some of the most interesting titles the festival had to offer. 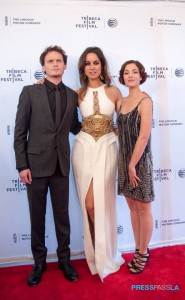 5 to 7
This was absolutely one of the best films I’ve seen in years. This is a story about the sanctioned adulterous affair of young aspiring writer Brian (Anton Yelchin) and older Arielle (Berenice Marlohe) the wife of a French diplomat. The film is as much a about a love of New York as it is about the love of the two characters. The director (Victor Levin) wonderfully uses sayings printed on plaques of benches in central park to serve as chapter headings – I don’t know if the director made up the plaques to suit the film, or if he searched every single plaque in the park to find ones that worked, but either way, the tender sayings inscribed there and captured on film made me want to go bench to bench and find out.

Photo Gallery from the 5 to 7 premiere.

Yelchin plays the young lover with the perfect amount of innocent naiveté, and Marlohe is gorgeous and smart, and has a smile that would make any 26 year old fall in love with her. The cinematography is used expertly to subtly enhance the romance, and to beautifully portray the relationship as it unfolds. The film slowly draws out the tension, and the audience watches on edge because of the surety of heartbreak that surely must come, but hoping that the director won’t ruin the magical but realistic romance. Yet, at the end, the film delivers the best of both worlds, breaking our hearts, but letting life go on with an appreciation of that broken heart, and the feeling that it really is better to have loved and lost, than to have never loved at all.

Alex of Venice
This is the story of Alex (Mary Elizabeth Winstead), an environmental attorney who is the bread winner of the household consisting of her son, father (Don Johnson) and stay-at-home husband (Chris Messina, director). While the film’s direction over all is fantastic, the weakest scenes in the movie are actually the ones with Messina on screen – I don’t think this is due to any lack of acting talent on Messina’s part, but rather due to the challenge of directing oneself on-screen, especially for a freshman director.

Messina, finally fed up with running the household on his own, and informs Winstead that he is leaving for a while, and she’s on her own. Katie Nehra shows up as the quirky sister, and gives a fun and funny performance. However, the show is stolen by Don Johnson, who gives an amazing performance as basically himself: an aging actor who is trying to find work playing a meaningful part in a community theatre performance of Chekhov’s The Cherry Orchard. The film is almost an adaptation of Chekhovs work, if not in a direct fashion then in a referential one, and is worth the watch.

Life Partners
This film start Leighton Meister and Gillian Jacobs playing best friends that are figuring out how to grow up. As often happens, one of the friends starts to grow up faster, as when Jacobs meets, dates, and gets engaged to Adam Brody. The film is funny and sweet, and paints a realistic picture of the strains of two friends trying to stay close when one of them is in a serious relationship and the other isn’t. Meister does an excellent job carrying the film, and Brody also give a subtle but nuanced performance.

An Honest Liar
Fans of the Amazing Randi will enjoy this documentary of the magician/debunker’s life, and those who are unfamiliar will surely become fans after watching. The doc chronicles the life of Randi from his childhood all the way to the present, and not only showcases some of his greatest debunks, but also reveals some of the secrets of Randi’s. The film raises questions about the nature of deception, about why we need to deceive, and why sometimes we need to be deceived.

Silenced
This doc focuses on the stories of three lives that have been ruined after attempts to whistle-blow on the federal government, Thomas Drake, formerly of the NSA, John Kiriakou, formerly of the CIA, and Jesselyn Radak, formerly of the State Department. In the wake of the recent disclosures and subsequent flight from the country of Edward Snowden, much of the public debate has been on whether Snowden acted appropriately, and whether he should have whistle blown through “official channels”.

Photo Gallery from the Silenced premiere.

The film paints a bleak picture of what happens when one attempts to disclose information through the official channels and incurs the wrath of the full force of the federal government. Even when ultimately acquitted of all charges, as was the case with both Drake and Radak, still there are careers ruined, divorces, massive debt, homes lost, and even in the case of Kiriakou, a jail sentence (although, it is not as clear that Kiriakou followed the exact letter of the law during his disclosures, it is clear that his punishment was absolutely the maximum severity allowed under the harshest interpretation of the law.) Certainly a sobering look at the actual machinations of a government that claims to be democratic and transparent.

Bachelor Weekend
This is a very funny film about a group of Irish guys going away on a “Stag”, or as it would be known in the US, a bachelor party. Their desire to have a low-key outdoors weekend is interrupted when the uninvited future brother-in-law, The Machine, arrives uninvited, and throws the trip into array with his supercharged alpha-male antics. The movie is an enjoyable slapstick comedy that is a little coming of age story for all of the characters involved. Peter McDonald is the highlight of the film, and manages to make The Machine come across as both an unbearable narcissist, and an endearingly inspirational philosopher at the same time.

Summer of Blood
This film starts as a simple, seinfeldian comedy-about-nothing, that is merely humorous reflections on live from writer/director/actor Onur Turkel… until 30 minutes in he is bit by, and becomes, a vampire. The film continues on from there as a seinfeldian comedy-about-nothing… about being a vampire. Despite the low value production quality, lack luster cinematography, and hardest right turn I have EVER seen in a movie, (I don’t read synopsizes of movies before I watch them, and maybe I should have known from the title, but seriously, when he gets bitten by a vampire, there is absolutely nothing that was planted earlier in the film that would have even hinted that a vampire was going to show up… and it happened 30 MINUTES in!!) it was very funny, and managed to squeeze laughs out of every scene. If you’ve ever found yourself laughing at a vampire movie that was taking itself seriously, you will definitely think this is hilarious. 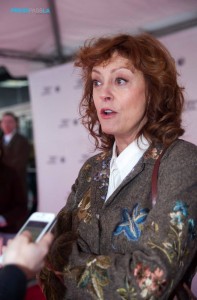 30 Year Old Bris
A 30 year old man getting a bris serves as a metaphor for the man sacrificing his manhood to the whims and preferences of a Jewish woman he is interested in. Really only notable for the scene of Chris Elliot playing the deranged, bris obsessed Rabi – absolutely hysterical. Where has Chris Elliot been? They could have cut this down to the minute and a half featuring Elliot.

The Body
Humorous tale of a serial killer trying to dispose of a body on Halloween night, when passersby think he is just in costume and force him to come to the party with them, dragging the body with him. Very funny moments throughout and very well shot. Fans of Game of Thrones will enjoy seeing Alfie Allen as the serial killer.

Kiosk
Charming animated short out of Finland about a woman who works at a newspaper/candy stand, and is so fat that she is stuck inside her kiosk. The short manages, without dialogue, to get across its message that no matter how difficult it may seem, you can always pick yourself up and follow your dreams.

Nocturnity
This short was cut together of footage of the documentarian’s efforts to capture herself on camera sleep eating – which is sleep walking, but going and raiding her kitchen while she’s up and moving around. Really horrifying to see and hear about the ultimate loss of control of oneself.

One Year Lease
Totally hilarious. This is simply shots of people first moving in, and then moving out, of a New York apartment. The on-screen visuals are totally forgettable, but what makes the film is the running VO provided by actual messages left on voice mails by a crazy, cat-lady landlord. This woman is so nuts, and the messages are so funny that I was sure that I was sure that the lines had been scripted and recorded, and was shocked to find out that this was actually a documentary.

Parachute
A flawless short. When making a short film, the stakes are very high. The audience will likely be able to pay attention for the entire 10 minutes, so they better count. Two bad minutes in a 10 film means that your film is only 80% decent, at best. Well, this one was perfect for every second. Set as one investment banker walks into his office to see the office has been stripped bare, and his remaining four colleagues inform him that the firm is bankrupt and out of business. The cinematography is slick, but not overdone for the subject matter. Each performance is nuanced and each actor nails their character. The dialogue is witty and sexy, and the punchline at the end puts the perfect end note on the short. It takes a great director to put together a flawless short, kudos to Peter Stebbings.

Peepers
Directed by Ken Lam, this features a suburban couple that is eating their gazpacho when they realize that they are being watched from outside their living room window. Absolute hilarity ensues as the couple devolves into madness, questioning everything about their yuppie, IKEA lifestyle, and proceeds to tear apart their home before they realize who is actually watching them. Funny and smart commentary on our consumer culture.

Pour Retnior
This short about a cook who is the Sous Chef at prision, only to be released back into public life to find work at the bottom of the ladder, working for one of his former employees. Even though the ending was rather predictable, this short was well-shot, well-acted, and an enjoyable watch. 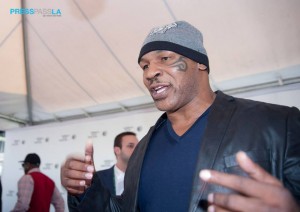