TRUE DETECTIVE- WILL SEASON 2 MEASURE UP?

Season one of HBO’s drama True Detective was blessed with a transcendent dream cast that, along with phenomenal writing/directing and the brutally nihilistic philosophy of Rust Cohle redlined the hype machine when the series premiered.

Season 2 of True Detective premieres in the shadow cast by the latent hype, how does it measure up?

Creator/writer Nic Pizzolatto brings us to a developing central California and the fictional city of Vinci for season two, hoping that the weight that Harrelson and McConaughey brought in season one can be matched here with an expanded main cast.

Episode one opens with Det. Ray Velcoro (Colin Farrel) talking with his ginger son before school who we soon find out is possibly the product of a rape. Despite this Farrell seems to love and even ferociously defends his son from a bully by giving a brass knucklesandwich (along with some ‘bad lieutenant-esque’ threats) to the bully’s father right on his own front lawn.

Velcoro is a guy who does bumps, drinks brown liquor sans brown bag and calls his son a ‘fat pussy’ for being bullied. He’s not cool like Rust Cohle (McConaughey’s season one character), nor does he seem to be a very good cop, nor is he even likable in the least. When the shit hits the fan at the end of the episode we are left with the bitter feeling that Velcoro is going to royally fuck this case up. But it doesn’t matter because Farrell is so damn good at it.

We learn a good bit about Velcoro in this first episode, enough to whet the appetite, too bad the same cannot be said for Ani Bezzerides (Rachel McAdams) of the Ventura Sheriff’s, whose characterization is introduced through some failed sex act that was probably a bit too ‘French’ for her booty call. Rounding out the cops is CHiP Paul Woodrugh (Taylor Kitsch), a war veteran on administrative leave.

Then there is Frank Seymon (Vince Vaughn), an entrepreneur to the public but more likely a robber baron in reality. On the cusp of a 68 billion dollar land deal the city manager suddenly disappears, turning him into the equivalent of a two-meter exhaust port on the Death Star that is Seymon’s land deal. Seymon has Velcoro in his pocket, and enlists him to lean on a reporter closing in on the truth. 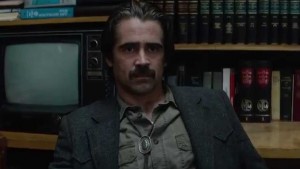 Season two is neo-noir to the absolute max. The characters seem to be aware of the Chandler-esque dialogue, gesturing with glasses of liquor with quips like ‘This place is built on a codependency of interests, it worries me you’re talking this stupid.’ Great atmospheric exterior shots by director Justin Lin folds the vast central California landscape in on itself making all of it the seedy underbelly.

So we get a few slices of lives, but what kind of pie does it make? Season one was a bit more sure of itself from the get-go: We had a horrific, ritualistic, murder giving us a boogeyman that we spent 8 episodes building to. We knew where that was going right away, even if the journey took 17 years of the character’s lives.

Season two, with a more suburban/urban setting gives us a different feel. Here the mystery comes less from the ‘Silence of the Lambs’ perspective and more from ‘Chinatown,’ a big, unknown, ugly conspiracy as the show’s boogeyman with a possible a dash or two of depravity. I can’t wait to find out who was driving the car with the land manager’s corpse and a giant raven mask in the passenger seat.

It’s patently unfair to compare the two seasons, especially through the hindsight of season one’s hype and success with the woefully small sample size of season two’s clean slate. Sure, not much happens in this episode minus character introductions, but the characters and especially the dialogue and atmosphere are self-assured even if the story is not yet, and that is a foundation that could allow season two to stand on its own.

The star power does not quite measure up. Farrell is incredible, and Vaughn does well to play dead center between menace and magnanimous, like the best parts of Stringer Bell and Avon Barksdale. Hopefully we’ll get more from the other two. In the end these variously broken and disparate elements do come together, and in this we’ll get the ‘True Detective’ pie that we deserve.