As the title suggests, True Story is the book-to-film adaptation of actual events that transpired in 2001 to renowned New York Times journalist, Michael Finkel.

Released in the current zeitgeist of successful investigative crime series such as “The Jinx” and This American Life’s “Serial” podcast, this film tells a story of clever deception, where it’s hard to separate the truth from the lies.

In the film’s opening, we see Finkel (Jonah Hill) walking the streets of New York, beaming over the phone to his girlfriend, Jill (Felicity Jones), after publishing a front page story on child slavery in Africa. The success is short-lived, however, when his report is torn apart with proof of clear embellishments. 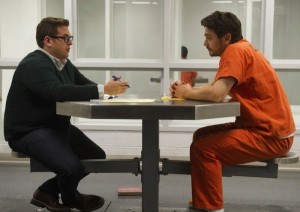 On the heels of this public shaming, Finkel quietly leaves New York to lick his wounds at Jill’s Oregon abode. After countless rejected pitches to numerous publications, Finkel receives an interesting call informing him that a convicted killer by the name of Christian Longo (James Franco) gave Finkel’s name upon his apprehension in Mexico. With his career on hold and nothing to lose, Finkel bites, starting up a correspondence with Longo.

The chilling story that ensues is played up by the cold Oregon landscape, close-up shots focused on Longo’s hands—the hands accused of killing his wife and three young children— and lengthy cryptic dialogues between the two parties. Perhaps the most chilling, however, is Longo’s demeanor—he’s attractive, well spoken, and seems genuinely interested in learning the writing craft from Finkel, whose career he claims to have followed. Both outcasts in their former worlds, the two form an unusual sort of friendship where Finkel tries to find himself while getting to the bottom of the truth, and Longo alienates everyone but Finkel.

Longo is not the only one with walls up. During Longo’s trial, Finkel is approached by the prosecution to “do the right thing” with sincere requests to divulge what he has learned from his unusual correspondence. Finkel keeps his truths close to his chest, holding out for a potentially career-redeeming story.

From start to finish, the film has a creep factor amplified by the fact that it’s based in reality, carried well by the ensemble cast. While the performances from Hill and Franco are totally engrossing, we could have seen more from Felicity Jones. Aside from an alarming scene at the end, her talent is shied away from and the relationship with Hill’s character is never fully actualized. This one note aside, the engagement felt watching the characters interact in the story is enough to make this film a worthwhile spend of 100 minutes.