Hollywood was buzzing about Trumbo on Friday Oct. 23rd at the Directors Guild of America. The opening night of the 11th annual Film Independent Forum premiered Trumbo, starring Bryan Cranston.

The film is a period piece set in the late 1940’s, showcasing true life events of successful screenwriter Dalton Trumbo, who’s career came to a halt when he was blacklisted for his political stance. With it’s contemporary undertone Director Jay Roach was able to accurately portray a 13 year span of a tragic time in Hollywood history. 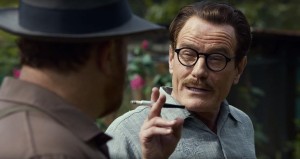 The threat of communism was real to Americans in the late 1940’s, people thought they were headed toward’s WWIII, Director Jay Roach recalled. There were conspiracy theories that filmmakers were sending codes to Russia through films. So when screenwriter Dalton Trumbo started to raise awareness about safe work environments and health insurance, him and his communist friends where thought of as a threat.

Trumbo, recounts the “Hollywood 10” who were blacklisted in the film industry for their political views. Hedda Hopper (Helen Mirren) to John Wayne, Kirk Douglas and Otto Preminger where among the many famous names that helped bring down the supposed communist threat in Hollywood.

Meanwhile the Trumbo family had to keep deep secrets for over an era to help bring justice to their family name. By using his words and whit, Trumbo was able to expose the film Industry and won two Academy Awards.

This film was told beautifully inside the confines of hollywood. Not many films are made about this tragic time.  Bryan Cranston did a phenomenal job brining this colorful, passionate and  charismatic man to life. Director Jay Roach was compelled to capture the authenticity of Dalton Trumbo and was able to do so, while also balancing the elements of politics and Hollywood. This movie is a must watch.