TRUST ME, ONE OF THE YEAR’S BEST INDIES

Clark Gregg is one of Hollywood’s most underrated assets. Although most people now know him as the understated Agent Coulson in Marvel’s Agents of SHIELD he is actually an accomplished writer, director and actor that has been around the industry for years. Trust Me is his second feature but this time he takes center stage as writer, director and lead actor.

The film tells the story of Howard Holloway, a struggling Hollywood agent for child stars. Unlike Entourage or Californication however nothing about his life is sugar coated or glorified. Gregg puts his character through the ringer from the start and in those moments he, and the rest of the cast, truly shines.

What the audience sees is 48-hours in the life of Holloway as he catapults from one tumultuous event to the next sometimes barely making it out unscathed. At the center of it all is his latest child star, Lydia, played with ferocity by newcomer Saxon Sharbino. For such a young star she brings some serious weight to the role of a young woman who has seen a lot but can’t show it due to the nature of the industry. Like everyone in the cast Gregg allows Sharbino the room she needs to totally own her scenes even against heavy hitters like Sam Rockwell. The movie is just as much a showcase of her talents as Gregg’s.

There’s a scene about halfway through the movie Gregg show he really is a master at his craft. While on the phone with a studio executive outside a fast food restaurant he times the conversation just right so that he can leave the person on the other end hanging while he places his order. While small and subtle it adds weight to the moment and really elevates what could have been a throwaway scene. The whole film plays like that, piecing together a compelling narrative that truly draws the audience in and never lets up. 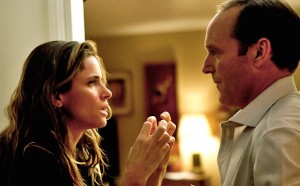 The movie itself feels like a fully realized universe and one that, were it not for the ending, would make a fantastic pilot for a TV series. The end result though is totally worth it. The movie’s ability to float easily between drama and humor makes it feel both real and alive.

Trust Me will be available On Demand and iTunes May 6 and will open in theaters on June 6.