You could feel the love in the air last Friday morning in Hollywood during the second day of the 8th annual Turner Classic Movie Film Festival, when Carl and Rob Reiner, respectively, were commemorated for their myriad and vast array of contributive works to the film industry.

Standing in front of a crowd of press, close friends, relatives and seemingly endless adoring fans the Reiners’ both had their hands and feet imprinted into cement, to be displayed in the courtyard of the Grauman Chinese Theatre, and it was a celebration amassed through the most prestigious of Hollywood royalty. 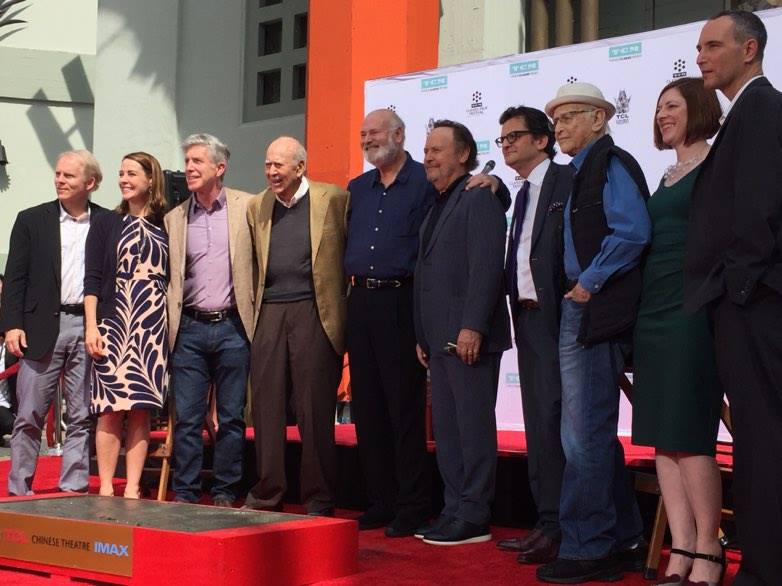 As Ben Mankowitz took to the podium, granting well wishes and setting the tone for what is the first time in history, that two family members at one time would be inducted to the Courtyard walk of fame, collaborators with the father and son duo collected and heightened the sensation of the morning, from family friend Norman Lear (producer of TVs All in the Family, Maude, et al), to Rob’s longtime friend and collaborator Billy Crystal, to Princess Bride star Cary Elwes, and more.

Indeed, the air was rich with the feeling of pizazz when Billy Crystal took to the podium, and concocted robust mounds of laughter, when he masterfully conducted a symphony of political jokes that seamlessly tied into the careers of his two honorees. These jokes ranged from Carl Reiner’s association with the picture The Russians are coming! The Russians are Coming! to the bald headed resemblance that the father and son duo share. And through it all, you couldn’t help being slightly choked up at  the admiration and love he too, has for these deserving industry constituents.

The press went wild as Reiner &  Reiner delivered their fingerprints and shoe soles to Los Angeles history, with a particular emphasis on the importance of remembrance in the future, not just for their films, but for all who had passed through.

It’s easy to assume that one has to have had infinite successes and a name with marquee value, to receive such an accolade as immortality through the Grauman courtyard. The industry has, and continues to create counter cultural influence on society, using it’s celebrity and pop culture to speak in tongues to many the niche crowds and adherent listeners. The enormous focus on this singular event indubitably stands as its own indication.

However, this Hollywood love-in was also a reminder that love conquers all, that greatness and positive being can dictate the best route for we the people. And that was what patrons of the festival loved to hear that morning.