Megan Fox, Stephen Amell and Producers Andrew Form and Brad Fuller walked the red carpet for Teenage Mutant Ninja Turtles: Out of The Shadows debut at the opening night of WonderCon.

WonderCon, which ran from March 25-27th, moved from its usual home in San Diego to the Los Angeles Convention Center this year. The change of venue didn’t deter the fans who came out in the thousands to get a glimpse at their favorite comic book superher 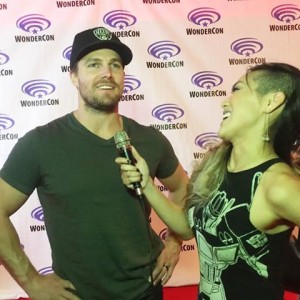 Teenage Mutant Ninja Turtles: Out of The Shadows  is the sequel to 2014’s Teenage Mutant Ninja Turtles and is being directed by Dave Green and written by Josh Appelbaum. It stars Megan Fox, Stephen Amell, Will Arnett, Brian Tee, Tyler Perry, Brittany Ishibashi, Laura Linney and William Fichtner.  Check out what Megan and Stephen had to say to our host Kaori Takee about the latest film!

Watch the trailer here. In theaters June 3rd in 3D and IMAX 3D