If you have ever found yourself frustrated with the repetitive, uninspired mediocrity prevailing the airwaves on virtually every front, then I suggest you look no further than Australian rockers Twelve Foot Ninja. While attending Rock on the Range, I was able to have an interview with the band’s lead singer Nik “Kin” Etik, and we had a lot of fun discussing rock music from multiple perspectives.

Describing Twelve Foot Ninja’s genre is a challenge in and of itself. There is a definite rock and metal influence, although there are also undertones from genres such as reggae, Latin and alternative. “Australia is very influenced by America and Western culture,” Kin explained, “but growing up I was influenced by a lot of different acts from Zeppelin to Peter Gabriel.” However, for those who would insist upon such a classification, I persisted. “After a lot of conversation and a heated debate,” Kin mused, “we finally settled on metal fusion.”

They released their first full album at the end of 2012 called Silent Machine, which contains a track of the same name. However, before settling on that, they were originally debating calling the album “Shrunken,”which is not only the name of another track on the album but it is also the cover art. “We threw it around for a while,” Kin said, “but it never really sounded right. So we thought, ‘well a shrunken is a like a silent machine.’ And we are too; we literally came out of nowhere onto the scene so it had a much better feel to it.” 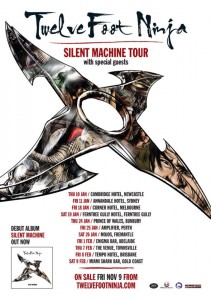 They are currently touring for the rest of the month in the United States before returning to Australia. They have their album available, as well as two separate EPs and a 72 page graphic novel to further the story. They are available on their website TwelveFootNinjacom.