TYLER PERRY TRADEMARKS WHAT WOULD JESUS DO?

What Would Jesus Do? Well, first and foremost, apparently, he should have made sure that he wouldn’t let his trademark catchphrase lapse so that someone else could buy it. Tyler Perry, writer and director of the Madea film series as well as others, has officially purchased and owns the trademark catchphrase, “What Would Jesus Do?” I, like I assume many of you, weren’t even aware that the catchphrase was up for grabs, let alone could be purchased. It almost makes you want to run down to the patent office to see what else might be available. I wonder if Anne Robinson still has claim to, “You ARE the weakest link; good-bye.”

With a little research, you’ll find that the phrase was attributed to first being used in the 1896 novel “In His Steps: What would Jesus Do?” by Charles Monroe Sheldon. Apparently, the copyright for the title was never properly filed by the publisher and, as a result, the title has moved around in ownership. It was popularized a few decades ago via the famous “WWJD” bracelets. Well, soon enough I think you’re going to see a lot more of them popping up in film releases from the, ahem, acclaimed director.

Now… trademarking a catchphrase may seem like a colossal, egotistical waste of time, but it has happened before. For example, Michael Buffer owns his opening and often parodied announcement of “Let’s Get Ready to Rumble.” Even Obama-birth-certificate-conspiracy-theorist and former billionaire Donald Trump attempted to coin his use of “You’re Fired” after the growing popularity of his reality show, The Apprentice. The office officially denied the latter’s claim because it was such a common phrase. Of course, some of us like to believe that it was because WWE owner Vince McMahon was so much more iconic in its usage. Nice to see that Perry will be kept in the best of company.

With all that, Tyler Perry laying claim to the phrase shouldn’t raise such ire… right? It was out there, he took it; so what’s the harm? For one, it is somewhat odd that a man who exemplifies traditional Christian values in a majority of his films exploiting a phrase that is supposed to inspire people to lead a better life for a financial gain?

I am pretty sure that Jesus would be a little pissed, actually. Ironic biblical hypocrisy aside, it seems to serve as little more than a vehicle to inflate the man’s already oversized ego. By using legal maneuvering and somewhat questionable tactics, he now has sole claim to one of the most widely commercialized Christian phrases. By all rights, it might not be long before the bracelet actually contains the prefix, “Tyler Perry’s What Would Jesus Do?”

The hint of light from all of this comes with the potentially unforeseen ramifications of this acquisition. Per the terms of the purchase, Perry must now actually use it or lose it. Maybe there’ll be a rom-com with a woman trying to find out what her wayward husband Jesus might be thinking. That’s right; there may actually be a “Tyler Perry’s What Would Jesus Do: The Movie” or, dare I suggest, “Madea’s WWJD?” Just let the horror and outright blatant egotistical, exploitative commercialism happen… just let it happen. 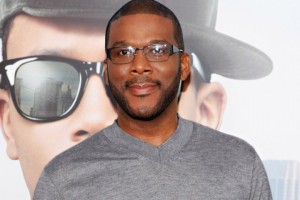 In an interview with The Hollywood Reporter, Perry actually stated, attempted reassuringly, “… not attempting ownership on the exclusive right to use ‘Jesus.” Well, I guess we can rest a little easier knowing that, even though he leveraged to get ownership of one of the most infamous pieces of Christian merchandise slogans, he isn’t trying to own the use of Jesus… so far.

What’s stopping him? Go for broke, I say. “Tyler Perry presents: Madea at the Last Supper.” Hollywood is clamoring for new fodder for worst movies, and we can’t rely on Adam Sandler and M. Night Shyamalan forever.