“Edward Scissorhands” has long been one of my favorite holiday movies.  The climatic scene featuring Winona Ryder and Johnny Depp as the snow falls has forever been etched in my memory. Now, Rockwell Table & Stage presents the musical parody of Tim Burton’s 1990 cult classic.

As you may remember, the film starred Johnny Depp as an artificial man named Edward, an unfinished creation who has scissor blades instead of hands. The film’s young man is taken in by a suburban family and falls in love with their teenage daughter Kim, played by Winona Ryder. The film’s all-star cast included Dianne Wiest, Anthony Michael Hall, Alan Arkin, and the late Vincent Price.

With a message about accepting those who are different from you- just as relevant today as in the 90s- coupled with amazing music, it’s a play you won’t want to miss! The show is created by Executive Producer, Bradley Bredeweg (showrunner of the hit Disney and Jennifer Lopes produced show “The Fosters” and spin-off “Good Trouble” ) and Kate Pazakis (creator of the UMPO series at Rockwell including The Devil Wears Prada, Hocus Pocus, Mean Gurlz, Clueless, Jurassic Park and Bridesmaids, among other theatrical productions.) Music includes hits like the late Whitney Houston’s “I’m Every Woman,” Leona Lewis’ “Bleeding Love,” Madonna’s “Like A Prayer,” Lady Gaga’s “Shallow,” Florence and the Machine’s “ShakeIt Out” and more. 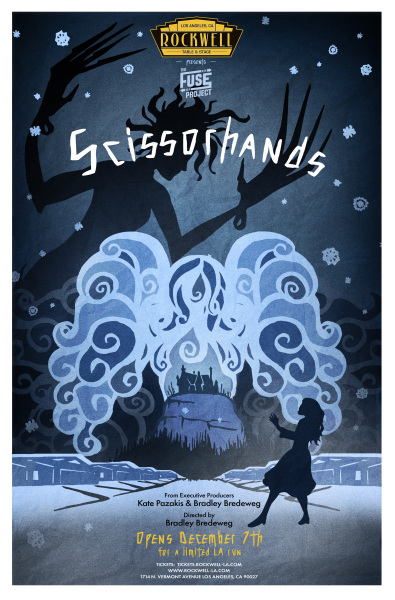 The cast includes Dione Gipson as the Inventor (Scissorhands mother) who has a powerhouse voice that kicks off the show on a high note.  Jordan Kai Burnett, seizes the iconic role of Scissorhands as a female actress and makes it her own. While I had a split second of initial doubt that I could get on board with a female in this beloved role made so famous by Depp, diversity casting aside, Jordan was the perfect actor/actress for the part.  Emma Hunton plays Peg, the suburban mother with a heart of gold.  Natalie Masini is the object of Scissorhands affection as Kim and belts out some of the shows strongest performances. Keir Kirkegaard is the easy to dislike  Jim and plays the role with the perfect amount of charm, arrogance, and shit-eating grin! The supporting cast was phenomenal including Carley Cassey as Joyce, Ryan O’Connor as Bill/Helen, and Morgan Smith as Esmerelda, the nosy neighbors who vie for hedge trimming and hair cuts then turn on Edward as quickly as you burn a casserole!

“I have always wanted to pay tribute to “Edward Scissorhands”, along with the idea of a female to play the lead. Today, when diverse casting has become so important, I’m excited to turn an already big-hearted iconic holiday movie into a unique and memorable immersive theatrical experience for a modern audience,” said Bredeweg.

Rockwell Table & Stage serves as the perfect venue for this intimate and engaging theatrical event, offering a delicious menu to accompany the entertainment. Guests could also select from a menu of custom cocktails including the show’s signature drink “The Scissorhands” made with Chopin potato vodka, orange juice, Dash cranberry juice, sweet & sour, and a lime wedge.

“This holiday treat has been a long time in the making, simmering inside our minds. This being Hollywood during the holidays, we can only imagine who from the film cast might show up on any given night to celebrate with us!” said Pazakis.

While we did not spot any of the film’s cast during the media preview night (and believe me, we were looking for an appearance by Depp!)  we would agree they would be missing out by not attending during the month-long run. Don’t miss out either!