UNDER THE SKIN WILL GET UNDER YOURS

So few movies these days are willing to take real risks, which makes Under the Skin a marvel on a lot of levels. There are so many reasons why the movie shouldn’t work, yet it continues to amaze with every viewing. Be warned, despite having an A-list actress like Scarlett Johansson in it the movie is not for everyone.

Right from the start it is clear that the viewer is in for something new and different. With an opening that clearly pays homage to Stanley Kubrick’s 2001: A Space Odyssey the audience is introduced to Johansson, a nameless alien that has taken on human form. She, like everyone else in the film, is nameless. It is left up to the audience to determine who she is and why she has come. Though as she spends the bulk of the movie driving around in her large unmarked van searching for male prey it becomes obvious that she isn’t a good natured alien.

Indeed, Johansson’s take on the character is one that is cold and calculating. Few actresses can pull off the layers she brings to a role with almost no dialogue. Watching her go from the emotionless alien to flirtatious vixen in a matter of seconds is fantastic. It becomes even more intriguing when, in one of the film’s most messed up scenes, she suddenly suffers a crisis of conscious that leads her on a strange journey through the second half of the film. 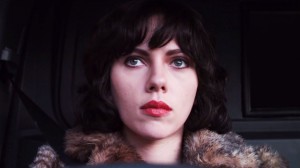 So much can be gathered from Johansson’s body language throughout the film. From the way she moves to the way she is shot she seems to be both the ultimate woman and one of the rare cinematic femme fatales that is filmed in a truly realistic fashion. Director Jonathan Glazer shoots the film’s sexuality in such a way that, despite being a science fiction film about an alien in human form, feels totally believable. Johansson has curves in all the right places and Glazer isn’t afraid to show them. The result allows the audience to feel a strange amount of compassion toward the alien creature, especially near the end of the film.

Under the Skin is sure to polarize audiences as its lack of dialogue and trippy visuals challenge the standard perception of what makes a movie.

Visit Under the Skin.