Unexpected debuted at Chicago’s Music Box Theatre and left an impression as real, raw and lovable as the city in which it was filmed.

The story begins in an ice-laden, inner city neighborhood of Chicago, where we meet high school student Jasmine (Gail Bean) and her teacher Samantha (Cobie Smulders), who have something in common: unexpected pregnancy.
The film takes us on a journey of their bonding where similarities shine, lifestyle differences strike and reality takes the wheel (whether pickle juice-infused Cheetos are allowed in the car or not.)

In the post-viewing interview, film writer and Chicago-native Kris Swanberg explained her goal to bring “naturalism and realism” to life with Jasmine and Samantha’s story, as opposed to the stereotypical storylines oft-born from “Hollywood’s smoke and mirrors.” 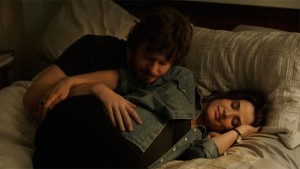 The audience sees just that, with awkward moments in prenatal yoga class to genuine conversations at Tastee Freez. When the young women find themselves in a parking lot with a collision of opinions regarding Jasmine’s potential as a college student, the two-pack part, left to face the challenges of their lives they had been dealing with together, individually. Both of the women’s ambition, drive and acceptance are put to the test. The result? Proof that life isn’t made up of one black-or-white set of rules. Apparently there isn’t one right or wrong way to do things after all.

The relationship blossoms with reconciliation in the summer sunshine of Jasmine’s baby shower. There, we see how the women have landed in variations of the places they’d hoped for yet landed exactly where they’re meant to be: back in one another’s lives.

Unexpected brings tears of joy with belly laughs, and leaves preconceived notions behind. If you like a film that tells an honest story, this film will leave you bundled with joy. It’s genuine honesty tests positive.