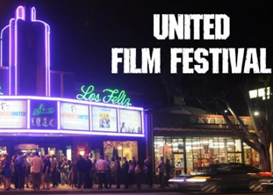 Independent cinema is alive and well in Chicago this week as the United Film Festival arrives in the city. With a lineup of almost 50 films, ranging from documentaries to science-fiction thrillers, the festival has something for everyone. The travelling festival, originally based out of Los Angeles, makes its rounds both nationally and internationally giving upcoming filmmakers a chance to get their work viewed by a large audience.

Unlike other film festivals the United Film Fest really does specialize in what could be considered fringe cinema. Movies like Other and It’s in the Blood seem to really push the limits of independent filmmaking and show just how far the industry has come in

the last decade or so.

The same can be said of the documentaries on the schedule for this week. Films like Sadermania and The Vacuum Kidare lessons in obsession and love, each of which have surprising results.

There is a lot to see and do at the festival so here are our top five picks for the week:

Be Filled With the Spirit– Be Filled With the Spirit is a dynamic look into the traditions of the black storefront churches as photographed by noted social documentary photographer, Milton Rogovin. Encouraged by famous African-American sociologist Dr. W.E.B. Du Bois, Rogovin photographed the storefront churches of Buffalo, New York for three years. The images are filled with the movement and expression of worship. With music and preaching recorded at the services, the energy of his photographs come to life.

Chicago Farmer– Chicago Farmer is a documentary chronicling the life of modern folk musician Cody Diekhoff, also known as Chicago Farmer. Cody grew up in a small town with no traffic lights called Delavan, IL, then moved to the big city of Chicago to pursue his dreams. He sings about small towns, big cities, and everywhere in between. The film tells his story through songs and interviews — back and forth all over Illinois. Chicago Farmer aims to capture the spirit of this unique voice in modern folk music.

Best Laid Plans– David Blair directs this powerful British Drama, loosely inspired by John Steinbeck’s novel Of Mice and Men. Set in Nottingham, the film revolves around the relationship between the thuggish Danny (Stephen Graham) and Joseph (Adewale Akinnuoye-Agbaje), a giant of a man with a mental age of seven. When Danny finds himself in debt to a local crime boss, he feels he is left with no choice but to manipulate Joseph into participating in a series of underground cage fights from which Danny can pay his debts. However, as the fights become harder and Danny and Joesph fall for two beautiful women, Danny starts to question his own motives. Ultimately, this is a story of love and friendship and how far you would go for a friend.

Thinking Inside The Box– Darrel is lonely and has a big crush on the girl next door. He would love to ask her out but there is only one problem in his way, he is agoraphobic and cannot leave the house.

Heads Up– An edgy, comedic story of two long time friends and somewhat surrogate siblings who love each other to death. When suspicions of trust and loyalty arise at the weekly poker game the situation erupts in an extreme way – because nobody fights like

The United Film Festival is in Chicago Sept. 22-27 at the Music Box Theatre. The festival began this year in Los Angles followed by New York, London, and San Francisco. Its final stop is October 11-14th in Tulsa!