This past weekend, Press Pass LA had the true privilege of attending a private event for the charity Unlikely Heroes whose mission is to rescue, restore and rehabilitate child victims of sex slavery through the implementation of restoration homes, rescue and prevention programs.

The event took place at the private Bel Air estate of hosts and supporters Rebecca Williams and Bruce Vanyo. It was a touching evening meant to help fundraise for the opening of Unlikely Heroes newest restoration home- totally three homes including Thailand, Mexico, and the Philippines. On Oscars Eve, Guests were treated to live music, open bars, tray-passed hors d’oeuvres, complimentary valet, generous raffle prizes, and a touching evening featuring photos, personal stories, and videos of the 15 children Unlikely Heroes has already saved (including one newborn baby left at their door for protection). The stories were truly moving and the progress these children have already made is remarkable. As the host Bruce Vanyo pointed out, “with some charities you don’t know where your money is going but with this charity, you know. It is the 15 children in this photo.” The new home will open up beds for children just like those whose stories were told this past Saturday evening.

The Startling Truth About Sex Slavery:

-Approximately 50% of transnational victims are minors

-80% of transnational victims are in the U.S. per year

-27 million people are currently enslaved in the sex trade globally. This is more than double the number of Africans enslaved during the Trans-Atlantic Slave Trade 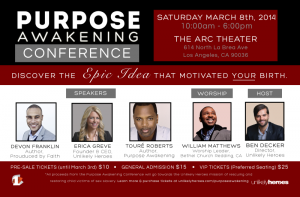 The charity has two upcoming events:

Erica Greve, Founder and CEO, and Ben Decker, Director of Unlikely Heroes,  will be on the hosting panel for the event this Saturday March 8th called Purpose Awakening at the Arc Theatre in West Hollywood from 10am-6pm. All proceeds from this event will go to benefit the Unlikely Heroes programs of rescuing children out of sex slavery and providing them with holistic restorative care services. The panel also features Toure Roberts who has a book coming out on Hachette Words called Purpose Awakening. This event is to coincide with the message of that book (which comes out a week after the event). Toure will be sharing a special message about following intuition and finding your life’s purpose.  In addition, DeVon Franklin, author of Produced By Faith and regularly featured guest on Oprah’s Life Class and Super Soul Sunday, will also be speaking.  DeVon also has an advice show on the Oprah Winfrey Network called Help Desk. He is a truly inspiring speaker – not to mention a very accomplished and prominent figure in the entertainment industry. He is currently the Senior Vice President of Columbia Tristar Pictures. To attend, get tickets here. 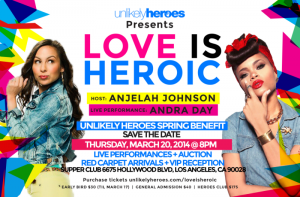 The next event is Thursday March 20th and includes the official ribbon cutting ceremony for the NEW home Unlikely Heroes is opening for rescued children. With your support  the children Unlikely Heroes have already rescued are thriving and the opportunity to open a second home and help even more kids is astounding. This event will be to help raising money for the running costs of the new home and to fill those beds with survivors! The event will be hosted by the hilarious, beautiful Anjelah Johnson. Anjelah sells out venues nationwide for her comedy tours and has been a huge supporter of UH since the beginning. There will also be a live performance from  musical artist Andra Day  who is signed with Warner Brothers Records. For tickets, visit here.

Unlikely Heroes is named after a collective group of people across the globe who refuse to leave 27 million people trapped in sex slavery. They are heroes not because the masses know their name, but because they’re willing to take up the fight. From rescuing kids out of brothels, to running restoration homes, to using our gifts to start campaigns or spread awareness, our heroes make a difference in many ways. We all have a role to play in abolishing modern-day slavery. The name Unlikely Heroes also refers to children who have been and are about to be rescued. Almost all our rescued child victims want to share their stories to help stop the trafficking cycle. To us, these rescued kids are the heroes most of all. To learn more visit UnlikelyHeroes.com

Check out this video from the Unlikely Heroes Awards Dinner & Gala.