VICE IS A SCI-FI BLUNDER

Vice, the new thriller from the producers of Lone Survivor and Escape Plan, is a science fiction film with no clear rhyme or reason. 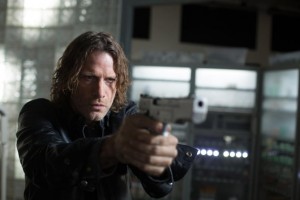 Thomas Jane as a rogue cop in Vice.

Based partly on the 1973 classic Westworld, the story revolves around an artificial (Ambyr Childers) that lives in a city that allows its citizens to play out their wildest fantasies without consequence. The AI amusement park is run by Julian Michaels (Bruce Willis) a multi-millionaire that never seems to leave the control tower. Despite having revitalized the city with his resort, Michaels finds himself constantly antagonized by rogue cop named Roy (Thomas Jane) who is angry at Michaels for filling his city with perverts.

There was a time where a movie starring both Jane and Willis would have ruled the box office. That time has passed and this, clearly, is not that movie. Both actors give phoned in performances and it is hard to tell if Willis is actually awake for most of his scenes. Jane does a decent job as a rough cop but manages to play it in the most clichéd way possible. This is, without a doubt, an easy paycheck for the both of them.

Most of the movie revolves around an android named Kelly who suddenly becomes self-aware. She manages to escape the city and slowly uncovers all of its, not very well hidden, dirty secrets. There are occasional moments of inspiration but much of it is content we’ve seen before just in a new package. Indeed, the movie itself feels like it could easily be a backdoor pilot for some late-90s TV on Fox or Syfy.

How this somehow made it to cinemas we’ll never know, probably due to its limited star power. Willis and Jane may have agreed to be on the poster show up for honestly less than a quarter of its running time. Fans of either of them will be sorely disappointed by this latest venture in both of their careers.

Vice is currently available in select theaters and on Amazon Instant Video.