Press Pass LA had the opportunity to chat with Victor Webster, star of SyFy’s hit show Continuum, which is currently filming in Vancouver and whose third season premieres in early April. We chatted with Webster about what to expect for Season 3 and about his upcoming film projects.

Q: What can Continuum fans expect to see this season?

VW: The past two seasons have led  us up to everything that will happen this season. There will be lots of twists and turns with new characters joining and old ones returning, and just things you never thought would be.  Die hard fans will be blown away! This is the season not to miss. My character, Carlos, will be going through a particularly hard time, trying to deal with his past while also dealing with the demands of his job. I feel that our writers to a great job of keeping my character moving and I am  happily surprised with what is happening next.

(But that was all he could tell us, no spoilers!)

Q: What do you think it would be like to be able to visit the future and/or the past?

VW: I would love to go 15 years into the future to see where technology would be. I am a gadget freak!  As far as going back to the past,  I would love to visit the 50’s when men wore their hair slicked back, wore  leather jackets,  and went swing dancing.

Q: Besides keeping busy on this hit show, what other projects do you have coming up that fans can look forward to?

VW: I have two movies coming out this summer-  A Good Man, with Steven Seagal, and The Scorpion King: The Lost Throne. I am also scheduled to be filming in Romania this summer.

Q: When you are not on set, what are your plans for the summer? 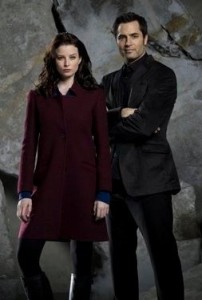 VW: It’s been a brutal winter in Vancouver so I am ready for the warm weather.  Aside from filming, I just plan to relax and maybe play some beach volleyball!